< Biden Calls for Unity to Deal with Worldwide Issues
Update Required To play the media you will need to either update your browser to a recent version or update your Flash plugin.
By Hai Do
21 September 2021


American President Joe Biden used his first speech before the United Nations General Assembly Tuesday to call for international cooperation. He urged nations to work together on the issues of fighting COVID-19, climate change, and human rights abuses.

The president made note of his decision to end America's longest war last month. "We've ended 20 years of conflict in Afghanistan," Biden said. "As we close this period of relentless war, we're opening a new era of relentless diplomacy of using the power of our development aid to invest in new ways of lifting people up around the world."

Biden and more than 100 world leaders returned to the U.N. for the first time since the start of the coronavirus pandemic. Sixty more heads of state will speak to the assembly using pre-recorded statements.

U.N. Secretary-General Antonio Guterres opened the gathering with his yearly state-of-the-world speech. He told the General Assembly, "We face the greatest cascade of crises in our lifetime."

Guterres said people may lose faith when they see their human rights restricted, corruption, and limited future for their children. He urged world leaders to pursue peace, deal with global warming and reduce the difference between rich and poor. He also called for supporting equality of the sexes, expanding the internet to at least half of the world's population and giving young people "a seat at the table."

The U.N. chief also expressed concern about tension between the U.S. and China. "It will be impossible to address dramatic economic and development challenges while the world's two largest economies are at odds with each other," he said.

Without naming China directly, the U.S. president said, "We are not seeking a new Cold War or a world divided into rigid blocs." 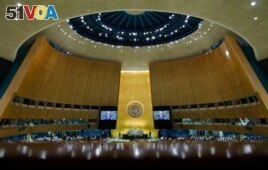 Biden added, "The United States is ready to work with any nation that steps up to pursue a peaceful resolution to shared challenges, even if we have intense disagreements in other areas, because we'll all suffer the consequences of our failure if we do not come together to address the urgent threats." He listed the threat of COVID-19, climate change and nuclear weapons.

Biden also must defend his decision, along with Britain, to equip Australia with nuclear-powered submarines. The move is expected to give Australia improved ability to deal with the growing Chinese presence in the Pacific Ocean. But the deal led to a diplomatic crisis with France which had an agreement to sell diesel-powered submarines to Australia that Australia canceled.

The American president told the assembly that he would seek $11.4 billion yearly to help developing nations deal with climate change. "The best part is, making these ambitious investments isn't just good climate policy, it's a chance for each of our countries to invest in ourselves and our own future," Biden told the gathering.

Biden's appearance on Tuesday supported his often-repeated idea that "America is back."

"As we look ahead, we will lead," he said. "We will lead on all the greatest challenges of our time from COVID to climate, peace and security, human dignity and human rights. But we will not go it alone. We will lead together with our allies and partners in cooperation with all those who believe as we do."

Later in the week, Biden will host a meeting on COVID-19. And he plans to meet with both Indian Prime Minister Narendra Modi and Japanese Prime Minister Yoshihide Suga next week. They are members of the "Quad," a group of four countries including Australia and the U.S., that seeks to balance growing Chinese influence in East Asia.

Hai Do wrote this report for VOA Learning English with additional reporting from VOA News and The Associated Press. Mario Ritter Jr. was the editor.

cascade –v. to flow or hang down in large amounts

pursue –v. to follow and try to catch or capture

address –v. to give attention to; to deal with something

challenge –n. something that is hard to do

rigid –adj. not able to be changed easily

bloc –n. a group of people or countries that are connected by a treaty or agreement or by common goals

consequences –n. (pl.) things that happen as a result of actions

ambitious –adj. having the desire to be successful, powerful or famous