< Best Beaches in the US and the World
Update Required To play the media you will need to either update your browser to a recent version or update your Flash plugin.
By Hai Do
27 May 2021


"Dr. Beach," a self-described coastal expert, has named Hapuna Beach of Hawaii as the best beach in the United States for 2021.

In his yearly ranking of the best beaches, he said Hapuna Beach, with its white sand and black lava rocks, "is a perfect place to swim, snorkel or scuba dive." On big wave days, try the boogie boards, he added.

Visitors to Hawaii and its beaches, however, are required to get tested for COVID-19 whether they are vaccinated or not. "Hawaii is a really special place, and so I think it's worth it," he told the Associated Press.

Kandi Miranda owns Manuela Malasada Company and runs a food truck near Hapuna Beach State Park. Born and raised on the Big Island of Hawaii, she was able to stay open for locals throughout the pandemic and is hopeful about the return of visitors.

Miranda described Hapuna Beach as "magical." She added, "The ocean in general in our culture is a really powerful place." 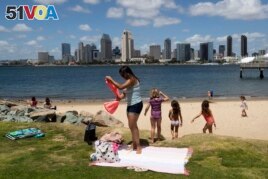 FILE - In this May 19, 2020, file photo, a family sets up at a beach looking out toward the San Diego skyline in Coronado, Calif.

"Dr. Beach" is also known as Stephen Leatherman, a professor at Florida International University. Leatherman has reviewed and rated beaches around the world for over 30 years.

Leatherman uses 50 criteria to come up with his yearly lists. They include cleanliness, smell, sand quality, water temperature and safety.

Recently, Leatherman has added a new one on whether smoking is permitted on the beach. "First of all, it's a health issue," he said of cigarette smoke. And he worried that people would leave cigarette waste on beaches.

The other top beaches on this year's list include Duke Kahanamoku Beach in Hawaii and Coopers Beach in New York. There are two in the state of Florida, St. George Island State Park and Caladesi Island State Park. To the north on the Atlantic coast are Beachwalker Park in South Carolina and Ocracoke Lifeguarded Beach and Lighthouse Beach in North Carolina. Others include Coronado Beach in San Diego, California, and Coast Guard Beach in Cape Cod, Massachusetts.

None of Leatherman's choices, however, made it to the list of the top 25 beaches in the world on Tripadvisor. The travel website uses information from its users to rate and review its "Travelers' Choice" top beaches.

Tripadvisor says the best beach in the world is Whitehaven Beach in Australia. Santa Maria Beach of Mexico, Baia do Sancho of Brazil and Grace Bay Beach of Turks and Caicos Islands are next. St. Pete Beach of Florida, which did not even make "Dr. Beach's" list, is rated as the fifth-best in the world.

No matter what beach is on your list, Leatherman advises beach-goers to observe social distancing at all times. He also says to bring along sun protection and, yes, cloth, face coverings!

Hai Do wrote this story with additional material from the Associated Press. Mario Ritter, Jr. was the editor.

snorkel –v. to swim underwater using a tube to breathe

scuba dive –v. an activity in which you swim underwater using tanks and tubes worn on you back

criterion (ia) –n.(pl.) something that is used as a reason form making a judgment or decision

review –n. something that is used for making a judgement or decision