< Belgian Religious Community Restarts Beer Making After 200 Years
Update Required To play the media you will need to either update your browser to a recent version or update your Flash plugin.
By Dan Novak
01 June 2021


The Roman Catholic religious community in Belgium known as Grimbergen Abbey says it will start making beer again after more than 200 years.

The clergy in Grimbergen have started a small brewery making the alcoholic drinks that carry the abbey's name.

The abbey's emblem is a phoenix along with a Latin language saying: "Ardet nec consumitur." That means, "Burned but not destroyed." The abbey was burned down and destroyed twice by French troops during the French Revolution in 1798.

Karel Stautemas is a clergyman at the abbey and is studying beer making. He said beer making was a "second life" for Belgian abbeys. He said the community of 15 Norbertine canons, a religious order of the Roman Catholic Church, is pleased about the beer's return.

Stautemas explained that religion was the main activity of the community. But, brewing was necessary "...because water at the moment in the Middle Ages wasn't drinkable and also it was a kind of payment."

The abbey was founded in 1128, and has had ties to large beer companies since 1958. Denmark's Carlsberg, a drink-making company, now owns the sales rights to the abbey's beer. 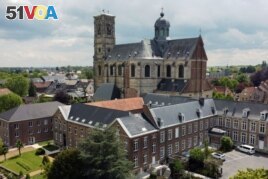 A drone picture shows Belgian Abbey of Grimbergen, which returns to brewing after a break of more than 200 years with a new microbrewery, in Grimbergen, Belgium May 26, 2021. Picture taken May 26, 2021. REUTERS/Yves Herman

The new brewery aims to combine 900 years of beer making with modern methods. To celebrate the recent opening, the abbey is releasing three new Grimbergen beers.

Marc-Antoine Sochon is a beer expert from Carlsberg who is helping create the new beers. He said one of the beers uses a method from the Middle Ages of smoking the malt mixture.

"That's the idea, I think, to make trials, experiments and try new things," he said.

The brewery also aims to use local plants. The abbey has planted hops and herbs in its garden, where they discovered an old cow bone used to make beer.

Grimbergen's members will follow the rules of Belgium's Trappist beer makers, another Catholic order. The rules require them to make the beer within the abbey and control the operation. They will also use any profits to care for the abbey and for charitable causes.

brewery — n. a place where beer is made

emblem — n. an object or picture used to suggest a thing that cannot be shown

phoenix — n. a magical bird in ancient stories that lives for 500 years before it burns itself to death and then is born again from its own ashes

order — n. a religious organization whose members usually live together and promise to follow special rules and traditions

charity — n. the act of giving money, food or other kinds of help to people who are poor, sick or in need