< Bars that Do Not Serve Alcohol Gain in Popularity
Update Required To play the media you will need to either update your browser to a recent version or update your Flash plugin.
By Dan Friedell
08 April 2021


Some new bars around the world seem to be missing something once central to their existence: alcohol.

The bars are trying to satisfy an increasing number of people who want to go out and have a good time with friends, but do not want to drink alcohol.

In Tokyo, a bar called 0% Non-Alcohol Experience serves an appealing drink made with wine and fruit, but no alcohol. The alcohol is removed from the wine in the manufacturing process.

In Austin, Texas, people gathered recently at the Sans Bar and drank alcohol-free beers and mixed drinks called watermelon mockaritas. It is similar to a margarita, a drink made with the alcohol called tequila.

These bars without alcohol are rare, but they are not new.

The United States saw its first such places in the 1800s during what was called the temperance movement. Its aim was to get people to reduce their use of alcohol. The movement led to a national ban on alcohol sales that was in effect from 1920 to 1933.

Chris Marshall is the owner of Sans Bar. He stopped drinking alcohol 14 years ago and worked in the field of drug abuse treatment.

He said most of the people who visit Sans Bar are not trying to stop drinking completely. "A lot of people just want to drink less."

Sondra Prineaux is one such customer. "It's just easier," she said. "I don't have to worry about leaving my car here and getting an Uber home."

And, she noted: "I'll wake up without a headache."

Head pain is a common reaction to a night of drinking alcohol. Drinkers also might wake up feeling very weak or sick to their stomach. All these conditions are signs of what is called a hangover. Many people do not like to drink as a result.

Tory Pratt founded Pratt Standard, a company in Washington, D.C. She makes liquid flavorings people add to alcohol so they can make cocktails. While she makes her products with alcohol in mind, a lot of customers buy her products to use without it.

She said some people use her company's ginger liquid mixed with water if they have a sick stomach. "It can be really great for settling the stomach," she said.

The ginger product can be mixed with hot water that can ease throat pain.

She noted that many people are working from home because of COVID-19. So, she said, a special drink even without alcohol is a good way to separate the work day from the rest of the night.

"I know that, like, in the pandemic a lot of people have leaned towards alcohol as a way to separate, you know, work from life. When you're working at home, it's really, really hard to have that separation."

A drink maker called Seedlip carries products with different natural flavors that take the place of alcohol in a cocktail. Another, called Ritual Zero Proof, makes products that are substitutes for traditional alcohols like gin, whiskey and tequila.

Douglas Watters owns Spirited Away, a beverage store in New York. In the past, he said there were very few choices for people who did not want to drink alcohol. 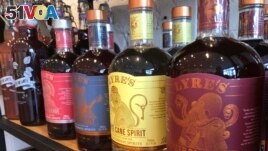 There are more choices for people who want to make drinks without alcohol. (AP)

But now, Watters said, "I have the wonderful problem of too many great options."

Low-alcohol products still make up a small number of sales in countries like the U.S., Germany, Brazil and Japan. However, while alcohol sales fell five percent in those countries in 2020, sales of non-alcohol drinks rose by one percent.

Brandy Rand works for IWSR, a company that researches drinks. She said people are trying to be healthier. She noted the popularity of a public health campaign called "Dry January," in which people try to remain alcohol-free for the month. The campaign began in Europe in 2013.

She said even though sales are small, people around the world are buying low- and no-alcohol drinks two to three times faster than traditional drinks with alcohol.

It is not completely clear why people are more open to reducing their use of alcohol lately. Some people are training for physical activity, others are trying to lose weight, some are pregnant. Others just decided they do not want to drink as much.

Joshua James was a bartender for years, making drinks at a traditional bar. But, he opened his own business after being treated for drug and alcohol abuse. The Ocean Beach Café in San Francisco, California does not serve alcohol.

"There's a thousand reasons to not want to drink as much," he said, adding that he wanted to help people who make that choice.

Watters of Spirited Away said the pandemic made him think about changing his drinking behavior.

"There are a lot of people, this past year more than ever, thinking more critically about what they're drinking and how it's making them feel," he said.

"Wine, and doing the same thing over and over again in the evening, it's just not different enough in the middle of a pandemic, and so people are looking for something that you can be really creative with and can really differentiate one night from another. "

Some alcohol-free bars in places like Dublin, Ireland and Berlin, Germany, closed for a time during the pandemic. Their owners are looking forward to finding new customers once people feel safer about going out.

Billy Wynne owns Awake, a store in Denver that sells coffee and alcohol substitutes. He plans to open a no-alcohol bar soon. Wynne says once people understand that they can have fun and feel better at an alcohol-free bar, they will want to return.

"People don't wake up to the negative impact alcohol is having on their life and then change their mind."

Dee-Ann Durbin wrote this story for the Associated Press. Dan Friedell contributed the interview with Tory Pratt and adapted the story for Learning English. Caty Weaver was the editor.

Do you worry about getting a hangover when you drink alcohol? We want to hear from you. Tell us in the Comments Section and visit 51VOA.COM.

bar –n. a building or room where alcoholic drinks and sometimes food are served

wine –n. an alcoholic drink made from the juice of grapes

alcoholic –n. a person who frequently drinks too much alcohol and is unable to live a normal and healthy life : a person who is affected with alcoholism

flavoring –n. a substance that is added to food or drink to give it a desired taste

cocktail –n. an alcoholic drink that is a mixture of one or more liquors and other ingredients (such as fruit juice)

lean –v. used to describe what someone wants to do, tends to do, or is likely to do

option –n. the opportunity or ability to choose something or to choose between two or more things

variety –n. the quality or state of having or including many different things

impact –v. to have a strong and often bad effect on (something or someone)