< Bangladesh Arrests Journalists Known for Fighting Corruption
Update Required To play the media you will need to either update your browser to a recent version or update your Flash plugin.
By Susan Shand
18 May 2021


A journalist in Bangladesh known for her reporting on government corruption was arrested on charges of violating an official secrets act, officials said Tuesday.

Rozina Islam is a reporter for the leading Prothom Alo newspaper. She is charged with using her cellphone without permission to photograph documents related to government negotiations to buy coronavirus vaccines. The government said she was waiting in a room of a government official involved in the negotiations when she took the photos. The Associated Press has seen the document that lays out the charges. 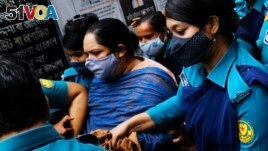 Islam is known for reporting on corruption involving the Ministry of Health and others. Several of her recent stories have reported on the millions of dollars spent to buy health equipment to deal with the coronavirus pandemic.

Islam's sister said she was held for more than five hours late Monday in the Ministry of Health. Her family added that she was physically and mentally harassed while being held.

Islam was then handed over to Dhaka Metropolitan Police to face charges under the Secrets Act. A police official confirmed that she was charged with theft and photographing of state documents.

The charges carry a possible death penalty, the New York-based Committee to Protect Journalists (CPJ) said in a statement.

Maidul Islam Prodhan is a spokesman for the health ministry. He said Islam took photos of "important" documents. He added that "She was also taking away some documents" over the objections of two workers at that time.

Islam appeared in court on Tuesday. Police asked to hold her for questioning for five days and defense lawyers asked for her release on bail.

The judge rejected both requests and sent her to jail until her next court appearance on Thursday, a defense lawyer said.

Journalists groups in Bangladesh and the CPJ demanded her release. A CPJ representative said the charges were brought under a "colonial-era law that carries ridiculously harsh penalties."

It said at least 247 journalists were reportedly subjected to attacks, harassment and intimidation by the government in 2020. More than 900 cases were brought under the Digital Security Act, with nearly 1,000 people charged and 353 detained, many of them journalists, it said.

journalist – n. :the activity or job of collecting, writing, and editing news stories for newspapers, magazines, television, or radio

harass – v. to annoy or bother (someone) in a constant or repeated way

bail – n. an amount of money given to a court to allow a prisoner to leave jail and return later for a trial

harsh – adj. unpleasant and difficult to accept or experience

intimidation – n. to make (someone) afraid