< Baby Sharks Struggle to Survive in Warming Ocean
Update Required To play the media you will need to either update your browser to a recent version or update your Flash plugin.
By Jonathan Evans
16 March 2021


Scientists say baby sharks are at risk of being born smaller and without the energy they need to survive because of warming oceans from climate change.

Scientists working with the New England Aquarium in Boston, Massachusetts studied epaulette sharks, which live off Australia and New Guinea. They found that warmer conditions sped up the sharks' growing process. That meant the sharks were born earlier and very tired.

John Mandelman is vice president and chief scientist of the Anderson Cabot Center for Ocean Life at the New England Aquarium. He said the findings could be used in the study of other sharks, including those that give birth to live young. The scientists published their findings in the journal Scientific Reports earlier this year.

Mandelman said it is widely believed that epaulette sharks are "hardy," or able to survive difficult conditions. "What it means is this very resilient species is more vulnerable than we thought, and this could be true of other sharks," he added.

They found that the sharks raised in the warmest temperatures weighed much less than those raised in average temperatures. They also showed reduced energy levels. 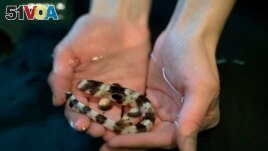 Epaulette sharks can grow to a length of about one meter. Their name comes from large spots on their bodies that look like decorations on some military clothing. The sharks are listed as stable and a species of "least concern" on the International Union for Conservation of Nature Red List of Threatened Species.

One study this year found that worldwide numbers of oceanic sharks and rays dropped more than 70 percent between 1970 and 2018. Overfishing is a main concern, while climate change and pollution also threaten sharks.

Carolyn Wheeler is a doctoral student at the University of Massachusetts Boston and with the ARC Centre of Excellence for Coral Reef Studies at James Cook University in Australia. She was the lead author of the epaulette shark study. She said that while all the sharks survived, those raised in warmer temperatures were not strong enough to survive for long in the wild.

She added that if the sharks are born smaller than usual "they are probably going to have to start looking for food sooner — and they're going to have less time to adjust to their surroundings."

Mariah Pfleger is an ocean scientist at the protection group Oceana. She said the study should serve as a warning to ocean governing agencies that careful supervision is needed to prevent the loss of more sharks.

"This study further exemplifies that sharks will not be immune to a warming ocean," Pfleger added.

adjust – v. to change in order to work or do better in a new situation

decorations – n. a medals or awards given to someone for doing something brave or honorable such as fighting bravely in a war

exemplify – v. to be a very good example of something; to show something very clearly

immune – adj. not capable of being affected by a disease

stable – adj. in a good state or condition that is not easily changed or likely to change