< Aviation Industry to Oppose ‘Flight Shaming’ Movement
Update Required To play the media you will need to either update your browser to a recent version or update your Flash plugin.
By Jonathan Evans
08 November, 2019


Leaders in the aviation industry plan to launch a campaign they hope will work against what they call a "flight shaming" movement. They say flight shaming has weakened demand for air travel in Europe. Some travelers there are increasingly concerned about the effects flying has on the environment.

Activists, such as Swedish teenager Greta Thunberg, have been calling for greater action against climate change. That includes avoiding air travel.

The International Air Transport Association (IATA) represents nearly 300 airlines. The group is organizing the campaign, which will involve industry investors. 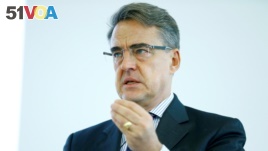 Alexandre de Juniac is head of IATA. He told Reuters, "We will launch a very, very big campaign...to explain what we have done, what we are doing, and what we intend to do in the future."

The campaign will try to explain to the public how the industry is reducing its effect on the environment. It is a response to what de Juniac called "misleading information."

IATA is organizing the plan through the Air Transport Action Group, a group of aviation industry organizations and companies.

De Juniac did not say when the campaign would start. But he noted that details would be available to investors across the industry, including airports and airlines.

Flight shaming has affected air travel demand in many European countries, including Britain, France and Germany.

Commercial flying is estimated to cause about 2.5 percent of worldwide carbon emissions. However, that number could rise as worldwide air travel increases.

The aviation industry says it has already cut carbon emissions for each plane traveler by one-half since 1990. The improvements are mainly the result of aircraft that use fuel more effectively. The industry plans to cut emissions further by 2050. It has a goal of stopping the growth of carbon emissions by 2020.

Airlines also have warned of the harmful effects of the flight shaming movement. Some have criticized the industry for failing to explain itself.

Tim Clark is president of the airline Emirates. He said in October that the industry had to do a better job in dealing with the issue. He added that improvements in technology have reduced the environmental effects of passenger airplanes.

Ahmed Hagagy reported this story for the Reuters news agency. Jonathan Evans adapted it for Learning English. Mario Ritter Jr. was the editor.

intend –v. to plan or want to do something