< Auxiliary Verbs in Everyday Speech
Update Required To play the media you will need to either update your browser to a recent version or update your Flash plugin.
By John Russell
06 January 2022


Imagine someone asks you if you can speak English. 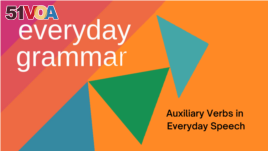 Or you could say:

In today's Everyday Grammar, we will explore the connection between grammar and speaking. You will learn about small details in these two statements that can teach you a lot about American English. In particular, you will learn about how auxiliary verbs are used in everyday speech.

But first, let's start with a few important terms and ideas.

In English, we generally divide words into one of two types – content words and function words. Content words include nouns, adjectives, and verbs. These words are often stressed – meaning said louder or in a higher pitch – in everyday speech.

Function words are words that have a grammatical purpose. Function words include pronouns, prepositions, determiners, and auxiliary verbs. These words are less central to expressing exact meaning. For this reason, they are generally not stressed in everyday speaking.* There are important exceptions, however, as we will see.

When are auxiliary verbs stressed?

You might be asking yourself the following question: What is the connection between word stress, auxiliary verbs, and the example sentences from the beginning of this report?

Think back to the example you heard at the beginning of this report:

Note that the content words such as speak and English are stressed.

Note that the auxiliary verb can is not stressed. It is in its so-called "weak form."

The difference is in the vowel sound.

Now listen to our other example sentence:

This has the negative form of can, can't, which is short for cannot. Our statement could have been:

This idea holds for all kinds of auxiliary verbs – could, should, would, and so on.

The next time you listen to Americans speak, pay careful attention to how the use auxiliary verbs – both in negative and positive forms. With time and careful study, you will become much more confident in how you use and pronounce auxiliary verbs.

*You can read more about function words in our recent report, Function Words in Everyday Speech.

auxiliary verb – n. grammar: a verb (such as have, be, may, do, shall, will, can, or must) that is used with another verb to show the verb's tense, to form a question, etc.

pronounce – v. to make the sound of (a word or letter) with your voice