< Australian Court: Media Companies Responsible for Comments on their Facebook Pages
Update Required To play the media you will need to either update your browser to a recent version or update your Flash plugin.
By Jonathan Evans
16 September 2021


Australia's highest court has ruled against some major news media companies in a case about comments on their social media pages. The court decided that the companies are legally responsible for comments because they are the publishers of their pages.

The decision is an important win for Dylan Voller. He is seeking legal action against the media companies. As a youth, Voller was placed in a detention center in Australia's Northern Territory. His treatment while there was the center of a 2016 documentary film. The film led to a deeper investigation into the mistreatment of young prisoners in Australia.

Several news organizations posted pictures of Voller on social media when the film came out. One showed him tied to a chair with a covering over his head. Many Facebook users posted comments about Voller on those companies' social media pages. 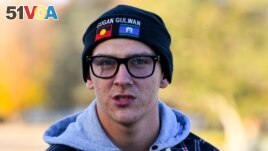 FILE - Dylan Voller speaks to the media during a press conference in Canberra, Australia, May 24, 2018.

The case has been held up by a separate legal dispute over whether the companies were the publishers of users' comments.

The High Court found that the media groups had permitted and urged comments from Facebook users by setting up a public Facebook page and posting content.

The judges said it did not matter that the companies deleted the comments later.

A spokesperson for Australia's Nine Network, one of the companies involved, said, "We are obviously disappointed with the outcome as it will have ramifications for what we can post on social media in the future."

Peter O'Brien is Voller's lawyer. He told the Australian Broadcasting Corp. that Voller is relieved the long legal fight, is over.

"People who might be vulnerable to social media mob attacks - they are protected," he said.

The High Court decision now permits Voller to continue his legal action against newspapers The Sydney Morning Herald, The Australian and others.

The case will continue later in the New South Wales state Supreme Court. A trial there will decide whether the Facebook comments truly defamed Voller.

obviously – adv. in a way that is easy to see, understand, or recognize

ramifications – n. something that is the result of an action, decision, etc.