< Australia's Native Species Under Threat
Update Required To play the media you will need to either update your browser to a recent version or update your Flash plugin.
By Gregory Stachel
30 November 2021

Nonnative species have invaded Australia and threaten to overrun native plants and animals. 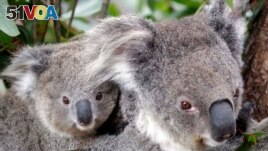 Maggie the koala, an animal native to Australia, climbs a tree with her offspring at Taronga Zoo in Sydney, Australia on September 1, 2011. (AP Photo/Rob Griffith, File)

The report is called Fighting Plagues and Predators: Australia's Path Towards a Pest and Weed-Free Future. It notes what researchers believe is an upcoming "... wave of new extinctions."

The study was done by the Commonwealth Scientific and Industrial Research Organization (CSIRO), a government agency.

Andy Sheppard is CSIRO's research director for biosecurity. He said Australia's colonization by the British more than 200 years ago has left harmful environmental effects.

"Look, Australia, as a lot of post-British colonial countries suffered from a huge amount of introduction of exotic species early in their colonization histories," he said. He added that there were groups set up to purposefully introduce plants and animals so the Europeans felt more at home.

Australia just like New Zealand has suffered as a result. "Australia unfortunately has the worst record internationally for mammalian extinction," he said and noted that this has much to do with the activities of introduced cats and foxes.

The report released on November 23 estimated the cost of the damage caused by invasive species in Australia at about $18 billion each year and growing.

The study said that immediate action was needed to stop the spread of invasive species and protect Australia's "irreplaceable native animals and plants."

Traditionally, chemical and biological controls have been used to manage wild pest populations. There are debates about these methods and some supporters of animals have criticized them as inhumane.

Scientists in Australia are working on genetic pest control methods. Testing is under way on small laboratory animals, but a so-called "working system" could be up to five years away. One possible biocontrol includes limiting their ability to reproduce.

Phil Mercer reported this story for Voice of America. Gregory Stachel adapted it for VOA Learning English. Bryan Lynn was the editor.

introduce – v. to bring (something, such as a type of plant or animal) to a place for the first time

mammal – n. a type of animal that feeds milk to its young and that usually has hair or fur covering most of its skin

pest – n. an animal or insect that causes problems for people especially by damaging crops