< Australia Promises to Protect Native Culture After Destruction of Holy Places
Update Required To play the media you will need to either update your browser to a recent version or update your Flash plugin.
By Alice Bryant
27 September 2020

The fines would be part of big changes to laws meant to protect ancient Aboriginal sites. 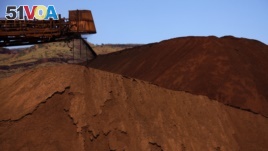 FILE - Mining company Rio Tinto shown unloading iron ore onto a pile at a mine located in the Pilbara region of Western Australia December 2, 2013.

The proposal follows destruction of two rock shelters by mining company Rio Tinto earlier this year. The rock shelters were about 46,000 years old. The Aboriginal people considered them holy places.

The proposed measure is called the Aboriginal Cultural Heritage Bill 2020. It would replace a 50-year-old law and removes a hotly debated part of the law. That measure stated that the government had the right to give permission to land users to destroy culturally important sites.

The new measure says traditional Indigenous groups will be given greater influence in the protection of their land. In the past, some groups had agreed to sacrifice holy sites to help Indigenous communities get a share of mining profits.

Rio Tinto is the world's biggest miner of iron ore. In May, the company destroyed two ancient rock shelters at Juukan Gorge in the Pilbara area of Western Australia. The two caves were considered one of Australia's most important areas for archaeological researchers. Indigenous leaders had strongly opposed development at the site.

Opposition was so great, even among Rio Tinto's shareholders, that the head of the company and two top aides were forced to resign.

The new legislation was being put together before the Juukan Gorge shelters were damaged. It promises a modern method of protecting Aboriginal cultural sites.

Ben Wyatt is Western Australia's Minister for Aboriginal Affairs. He says mining companies such as BHP have already reacted well to the legislation.

As a result of the Juukan shelter destruction, miners in important heritage areas have stopped work, Wyatt added. "And you have seen BHP, in particular, announce that," he told VOA.

If Western Australia lawmakers approve the proposal, the state could order fines of up to $7.2 million for unauthorized damage to Aboriginal sites.

Robin Chapple is a lawmaker with the Australian Greens, a coalition of political parties. He said the bill involves a "new and complex system" that some Indigenous groups would have trouble studying quickly. The last day state lawmakers are taking public comment on the bill is October 9.

The Kimberley Land Council is one of Western Australia's biggest Indigenous organizations. It said the proposed law completely ignores Aboriginal people "and their right to care for their heritage."

Nolan Hunter is the head of the group. He told the Australian Broadcasting Corporation the measure could still lead to destruction like that seen at Juukan Gorge. He said the law would be useless when miners and Aboriginal people disagree on protection of heritage sites.

Tribal leaders have demanded more legal protection for traditional landowners. That includes the right to veto development on their land.

Public hearings continued this week in a federal investigation of the destruction of the Juukan Gorge shelters. Investigators are studying failures by government and businesses that led Rio Tinto to use explosives at the site. It did this in order to dig out high-quality iron ore.

The earth is central to Australia's ancient Indigenous culture – a culture thought to be some 65,000 years old. Land is considered the mother of creation, connecting Aboriginal peoples to their past, present and future.

Phil Mercer wrote this story for VOA News. Alice Bryant adapted it for Learning English. George Grow was the editor.

heritage – n. the traditions, achievements, beliefs and other things that are part of the history of a group or nation

site – n. the place where something is, was, or will be located

Indigenous – adj. of the ethnic groups who are the original or earliest known inhabitants of an area

archaeological – adj. relating to science that deals with past human life and activities by studying the bones, tools, etc., of ancient people

shareholder – n. someone who owns shares in a company or business

unauthorized – adj. without legal or official permission or approval for something