< At Dubai Airport, Eyes Become Travelers’ Passports
Update Required To play the media you will need to either update your browser to a recent version or update your Flash plugin.
By Bryan Lynn
14 March 2021


In Dubai, airport passengers are now being offered the chance to use their eyes to confirm their identity without the need to show any documents.

The system was launched as the United Arab Emirates (UAE) continues to fight the COVID-19 pandemic. The government has pointed to the program as a tool to help control the spread of the new coronavirus because it does not require airport passengers to have contact with other people.

The system uses a biometric method. Biometric systems are designed to collect biological data that is unique to each person in order to identify individuals. Facial recognition is one kind of biometric method. Such systems use similar methods to those used in fingerprinting technology.

The system in Dubai uses equipment to scan a person's iris, the colored part of the eye. This requires passengers taking part in the program to look directly into a camera so biological data can be collected.

The use of eye scan systems has become more widespread across the world in recent years because of concerns about the accuracy of facial recognition technology. Iris biometrics are considered more dependable than systems that scan people's faces from a distance. 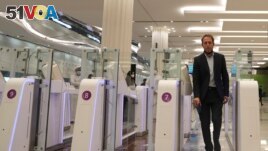 A man goes through an automated gate after he passed through the face and iris-recognition gate to board a plane, during a media tour at Dubai Airport, in the United Arab Emirates, Sunday, March 7, 2021. (AP Photo/Kamran Jebreili)

At Dubai's airport, the world's busiest for international travel, people could be seen stepping up to an eye scanner after checking in for their flights. After looking into the camera, they were approved to pass through passport control within seconds. The passengers did not need to carry paper tickets or use electronic documents to complete the process.

Officials in Dubai say the document-free passage is possible because the scan connects a person's iris data to the state's facial recognition database. The system is a partnership between airline company Emirates and Dubai's immigration office. Officials say the system quickly moves travelers through an automated process from check-in to boarding the plane.

Major General Obaid Mehayer Bin Suroor is deputy director of Dubai's General Directorate of Residency and Foreign Affairs. He told The Associated Press, "the future is coming." He said the system had become very "smart," taking only five to six seconds to complete the scanning process.

But just as with facial recognition technology, the program has added to fears of disappearing privacy for individuals. The UAE has already faced international criticism for targeting journalists and human rights activists.

In a privacy statement relating to its biometric system, Emirates says the airline links passengers' faces with other personally identifying data, including passport and flight information. It adds that the information can be kept for "as long as it is reasonably necessary for the purposes for which it was collected."

All collected biometric data is stored within the General Directorate of Residency and Foreigner Affairs," Emirates says on its website. The airline adds that its methods are in line with the European Union's law on data protection and privacy. The data can, however, be used "across the airport for identification purposes," Emirates said.

Bin Suroor said all personal passenger data kept by Dubai immigration officials is completely protected so that "no third party can see it."

Jonathan Frankle is a doctoral student in artificial intelligence at the Massachusetts Institute of Technology. He told the AP that "any kind of surveillance technology raises red flags, regardless of what kind of country it's in." But, he added, "in a democratic country, if the surveillance technology is used transparently, at least there's an opportunity to have a public (debate) about it."

Even with concerns about overreaching surveillance in the UAE, the country's massive facial recognition network only shows signs of expanding. Last month, UAE Prime Minister Sheikh Mohammed bin Rashid Al Maktoum announced new testing for facial recognition systems. He said the technology is meant to reduce the amount of paperwork needed for "some private sector services."

The Associated Press reported this story. Bryan Lynn adapted the report for Learning English, with additional information from Emirates airline. Hai Do was the editor.

scan – v. to look at the inside of something by using a special machine

accuracy – n. how correct or exact something is

automate – v. to use machines and computers instead of people to do work

surveillance - n. the act of carefully watching activities of people especially in order to control crime or the spread of disease

transparent – adj. being open and honest about something

private sector – n. businesses and industries that are not owned or controlled by the government