< At 101, Maine’s Oldest Lobster Trapper Has No Plans to Stop
Update Required To play the media you will need to either update your browser to a recent version or update your Flash plugin.
By Bryan Lynn
18 September 2021


Virginia Oliver has been trapping lobster in the northeastern American state of Maine for more than 90 years. And even at 101 years old, she says she has no plans to stop.

Oliver recently told The Associated Press she started catching lobsters at age eight. At that time, the electronic traffic signal was a recent invention and few women were harvesting lobsters.

Oliver still goes out to set traps off Rockland, Maine, with her 78-year-old son Max. She uses a boat that once belonged to her late husband. The boat, called "Virginia," was named after her.

Oliver is now the oldest lobster fisher in the state and possibly in the world. "I've done it all my life, so I might as well keep doing it," she told the AP.

Oliver said she worries about the health of Maine's lobster population. She said the lobsters have been facing heavy fishing pressure in recent years. 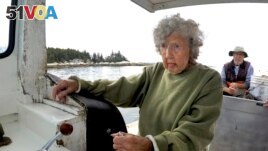 The lobster industry has changed over Oliver's many years on the water. For example, the sea creatures have grown from a working class food to a tasty delicacy.

When she first started trapping, lobsters sold for 28 cents a pound. Now, they bring in 15 times that. Wire traps have replaced her beloved wooden ones, which these days are mainly used as decorations in seafood restaurants.

Other parts of the business have remained much the same over the years. She still loads up pogeys – a term used in the industry for menhaden fish – to put inside the traps to lure lobsters in. And, she still gets up before the sun rises to get an early start on the boat.

In some ways, she was destined for this life. Her father was a lobster dealer who started around the 1900s. She joined her father on trips and that is when Oliver's love of the business began.

Wayne Gray, a family friend who lives nearby, said Oliver had a minor health problem a few years ago when a crab bit her finger. The incident required her to have seven stitches. But even then, she did not think about retiring her lobster traps.

Gray said, "The doctor admonished her, said ‘Why are you out there lobstering?'" Oliver answered, "Because I want to."

After all these years, Oliver still gets excited about a lobster dinner of her own and said she usually prepares one for herself about once a week.

When asked whether she sometimes considers ending her work, Oliver said she just does not see any good reasons to do so.

"I like doing it, I like being along the water," she said. "And so I'm going to keep on doing it just as long as I can."

delicacy – n. a special food, usually something rare or costly

decoration – n. things put on or around something to make it look more attractive

lure – v. to persuade someone to do something

destined – adj. certain to achieve or experience something

stitch – n. one of the small pieces of thread used to sew together a cut

admonish – v. to gently tell someone that they have done something wrong