< Astronomers Discover Source of Fast Radio Burst
Update Required To play the media you will need to either update your browser to a recent version or update your Flash plugin.
By Alice Bryant
07 November 2020


A little luck helped astronomers solve a mystery in space: What causes powerful but super-fast energy signals that move through the universe?

Scientists have known about these signals, called fast radio bursts, for about 13 years. And they have seen them coming from outside our galaxy. This makes it harder to know what is causing them. What makes it even harder is that they happen so fast -- in a few one-thousandths of a second.

Then in April, a rare but much weaker burst from inside our own galaxy was found by two dissimilar telescopes. One of the telescopes was a California doctoral student's handmade equipment, which included metal cookware. The other was based at a $20-million Canadian space observation center. 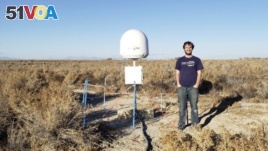 This undated photo provided by Caltech shows radio astronomer Christopher Bochenek with a STARE2 station he developed near the town of Delta, Utah. (Caltech via AP)

They linked the fast radio burst to a strange kind of star called a magnetar that is 32,000 light-years from Earth. That information comes from four studies in Wednesday's journal publication Nature.

It was not only the first fast radio burst linked to a source; it was also the first coming from our galaxy. Astronomers say there could be other sources for these bursts. But they are now sure about one of the sources: magnetars.

Magnetars have 1.5 times the mass of our sun, crowded into a space the size of New York's Manhattan area. They have huge magnetic fields that are full of energy, and sometimes bursts of X-rays and radio waves suddenly come from them. That information comes from Ziggy Pleunis. He is an astrophysicist at McGill University and co-writer of the Canadian study.

The magnetic field around these magnetars "is so strong any atoms nearby are torn apart," said astronomer Casey Law. He is with the California Institute of Technology (Caltech) and was not involved in the research.

There are maybe 12 or so of these magnetars in our galaxy. They are very young and part of the star birth process. And our Milky Way galaxy is not as full of star births as other galaxies, said Shami Chatterjee of Cornell University. He was not part of either discovery team.

This burst in less than a second had about the same amount of energy that our sun produces in a month. And that is still a lot weaker than radio bursts from outside our galaxy, said Christopher Bochenek. The Caltech radio astronomer helped discover the burst with his handmade equipment.

The radio bursts are not dangerous to us, not even the more powerful ones from outside our galaxy, astronomers say.

The ones that come from outside our galaxy and travel millions or billions of light-years are very powerful. They are tens of thousands to millions of times more powerful than anything we have found in our galaxy, explains Daniele Michilli, an astrophysicist at McGill University. He is co-writer of the study and part of the Canadian team.

Scientists think the bursts may happen more than 1,000 times a day outside our galaxy. But finding them is not easy.

"You had to be looking at the right place at the right millisecond," Cornell's Chatterjee said. "Unless you were very, very lucky, you're not going to see one of these."

Astronomers have no idea how often the bursts happen inside our own Milky Way galaxy.

"We still don't know how lucky we got," Bochenek said. "This could be a once-in-five-year thing or there could be a few events to happen each year."

Bochenek's antennae cost about $15,000. Each is "the size of a large bucket," he said. It's a piece of 6-inch metal pipe with two pieces of round metal cookware around it, the doctoral student explained. They are simplistic instruments designed to look at a huge piece of the sky. And they are meant to see only the brightest of radio flashes.

Bochenek imagined he had possibly a 1-in-10 chance of catching a fast radio burst in a few years. But after just one year, he made a valuable discovery.

The Canadian observatory in British Columbia is much more developed but is aimed at a much smaller piece of the sky. And it was able to find the source of the magnetar in the constellation Vulpecula.

The bursts are affected by all the material they pass through in space. This might help astronomers understand and map the unseen-to-us material between galaxies and "weigh" the universe, said Jason Hessels. He is chief astronomer for the Netherlands Institute for Radio Astronomy and was not part of the research.

Astronomers have had as many as 50 different ideas about what causes these fast radio bursts, including aliens. They say that magnetars may not be the only answer.

The Associated Press reported this story. Alice Bryant adapted it for Learning English. Ashley Thompson was the editor.

galaxy – n. any one of the very large groups of stars that make up the universe

source – n. the cause or origin of something

antenna – n. a device (such as a wire or a metal rod) for sending or receiving radio or television signals

bucket – n. an open container with a handle that is used for carrying things, such as liquids

alien – n. a creature that comes from somewhere other than the planet Earth