< Asteroid or Space Junk? NASA Thinks Mystery Object Could Be Old Rocket
Update Required To play the media you will need to either update your browser to a recent version or update your Flash plugin.
By Bryan Lynn
18 October 2020


A space object recently discovered as a possible asteroid may actually be an old rocket from a failed moon-landing attempt in the 1960s.

Astronomers observed the object last month through a telescope based in Hawaii. The scientists documented the object as an asteroid that was on its way toward Earth. Searching for such objects is common among astronomers as part of international efforts aimed at protecting Earth against asteroid hits.

The object was given the name 2020 SO. It was added to the International Astronomical Union's Minor Planet Center's list of asteroids and comets found in our solar system. Currently, the list is just a little under 1 million.

Chodas has suggested that the object is likely the old booster rocket that successfully pushed NASA's Surveyor 2 lander to the moon in 1966.

"I'm pretty jazzed about this," Chodas told The Associated Press. "It's been a hobby of mine to find one of these and draw such a link."

Chodas has been studying asteroids for many years. He is currently director of the Center for Near-Earth Object Studies at NASA's Jet Propulsion Laboratory in Pasadena, California.

Surveyor 2 was a robotic spacecraft that crashed into the moon after one of its engines failed to start during the trip. The rocket, named Centaur, kept flying past the moon as planned and became space junk.

The object being observed is estimated to be about 8 meters long based on its brightness. That is about the size of the old Centaur rocket. 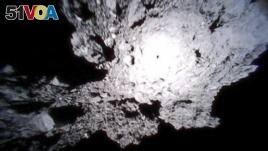 Chodas said the first thing that caught his attention was the object's near-circular orbit around the sun, which is very similar to Earth's. Such behavior is unusual for an asteroid. Chodas said the movement represented "flag number one" that the object is not an asteroid.

The mysterious object is also in the same plane as Earth, not positioned above or below. That was the second red flag for Chodas, since asteroids usually travel at uneven angles. Lastly, Chodas said the object is coming toward Earth at about 2,400 kilometers an hour, which is considered very slow for an asteroid.

As the object gets closer to Earth, astronomers should be able to better follow its orbit and observe how much it is pushed around by radiation and heat effects of the sun. If it is an old empty rocket, it will move differently than a heavy space rock that is not as affected by outside forces.

The movements are how astronomers usually tell the difference between asteroids and space junk such as used rocket parts.

Chodas said there are likely numerous fake asteroids out there. But if the movements of the objects cannot be effectively observed or measured, it is difficult to confirm their exact identities.

Sometimes, however, it can be the other way around. In 1991, Chodas and others identified a mystery object as an asteroid rather than space junk, even though its orbit around the sun was very similar to Earth's.

In 2002, Chodas discovered what he believes was the leftover Saturn V booster rocket from 1969′s Apollo 12, the second moon landing by NASA astronauts. He admits the evidence was circumstantial, given the object's one-year orbit around Earth. The object was never documented as an asteroid, and left Earth's orbit in 2003.

But Chodas says the latest object's path is more direct and much more stable, which strengthens his theory. "I could be wrong on this. I don't want to appear overly confident," he said. "But it's the first time, in my view, that all the pieces fit together with an actual known launch." 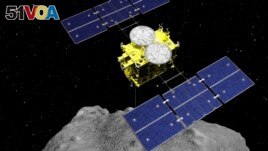 This computer graphics image released by the Japan Aerospace Exploration Agency (JAXA) shows the Hayabusa2 spacecraft above the asteroid Ryugu. (ISAS/JAXA via AP)

Carrie Nugent is an asteroid hunter at Olin College of Engineering in Needham, Massachusetts. She said Chodas' theory is "a good one" based on strong evidence. Nugent is the writer of the 2017 book "Asteroid Hunters."

"Some more data would be useful so we can know for sure," she told the AP in an email. "Asteroid hunters from around the world will continue to watch this object to get that data. I'm excited to see how this develops," she added.

The Associated Press reported on this story. Bryan Lynn adapted the report for VOA Learning English, with additional information from NASA. Ashley Thompson was the editor.

asteroid – n. a rocky object that goes around the sun like a planet

junk - n. things that are considered to be no longer useful or valuable

hobby – n. something done for pleasure, not for a job

angle – n. a space between two lines or surfaces that meet at one point

booster – n. engine on a spacecraft that gives extra power for the first part of a flight

circumstantial – adj. containing information about something that makes you think it is true but not having enough evidence to completely prove it

stable – adj. firmly fixed and not likely to move or change

confident – adj. feeling or believing that one has the ability to succeed in something