< Asian American Businesses Suffer during Pandemic
Update Required To play the media you will need to either update your browser to a recent version or update your Flash plugin.
By Dan Novak
20 April 2021


Jan-Ie Low and her family have owned a restaurant in Las Vegas for the past 15 years. Like many restaurants during the pandemic, it shut down for two months last year.

When the SATAY Thai Bistro & Bar reopened it could not have people inside. Because of the hot desert heat, people could not eat outside either. And conventions which bring people to Las Vegas were cancelled because of the health crisis. So they turned the restaurant into a food delivery business.

"If you don't adapt, you're going to be left behind," said Low. Even with the changes, sales dropped by half from 2019.

The pandemic has been especially hard on Asian-owned businesses like the Low's.

Many Asian Americans operate small businesses like restaurants and nail salons. These service industries were hit hard by pandemic restrictions on indoor gatherings.

Language barriers and limited relationships with banks have made it harder for them to learn about government aid. And they have also faced a rise in hate crimes from those that blamed Asians for the virus.

A JP Morgan Chase Institute study showed that, by the end of March, sales for Asian-American businesses dropped by more than 60 percent. In comparison, most small businesses faced a 50 percent drop during the pandemic.

Michael Park's family has owned a dry cleaning business in Philadelphia for 34 years. He said business has gotten better since the summer. But sales are still only 25 percent of what they were before the pandemic. Park is using government loans to stay in business. 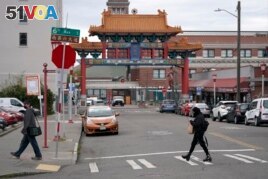 Jamie Lee works for a community development organization that supports small businesses in Seattle's Chinatown area. She said many business owners she works with just know enough English to serve customers. But some might feel their English is not strong enough to go through the complex process to seek government assistance.

Teizi Mersai runs Lam's Seafood Market, a Vietnamese-American-owned food store in Seattle. He said small businesses like his have survived with the help of neighborhood groups and local aid organizations.

"The community really does come together," he said.

An Asian American worker at the store, however, was attacked on his way home from the store. He was not seriously hurt. It is unclear whether the attack was a hate crime but employees are taking precautions.

We "tell everyone to make sure you travel in pairs as much as you can," Mersai said.

Jonnelle Marte reported this story for Reuters. Dan Novak adapted it for VOA Learning English. -----------Hai Do was the editor.

delivery-n. the act of taking something to a person or place

adapt- v. to change your behavior so that it is easier to live in a particular place or situation

sale-n. the act of selling something : the exchange of goods, services, or property for money

afloat-adj. having enough money to continue : able to continue without suffering financial failure