< Art Becomes Protest against Tokyo Olympics
Update Required To play the media you will need to either update your browser to a recent version or update your Flash plugin.
By Gregory Stachel
23 June 2021


The Japanese public mostly opposes holding the Tokyo Olympics next month during a pandemic. However, public protests to show such dissent have been rare.

A different way people have expressed their concern about the Olympics has been art. They have protested through messages on clothing, paintings and other art forms.

In some cases, officials have demanded the sometimes satiric art and other products be removed. Artists say their freedoms are being taken.

Miwako Sakauchi is among them. On this day, she stands in her workroom and paints on torn cardboard and drawing paper. She uses the five colors that represent the modern Olympics.

Sakauchi calls the series of paintings, Vortex. She said they express what she called the, "anger, fear, sense of contradiction and state violence" over Olympics preparations. People have been forced from their homes and trees have been cut down to build huge sports centers for the games, she said.

"I can't think of it as a ‘festival of peace' in this situation," Sakauchi said. "It's totally nonsensical."

The risk of infection from the virus may have prevented some people from taking to the streets to protest. Recent public protests in Japan have been small, with crowds of less than 100 people. 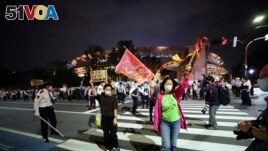 Sakauchi created the paintings after she was contacted by a group of artists who organized an anti-Olympics art event last summer. Her works were shown in another event in February.

Kai Koyama is the main organizer of the anti-Olympics art event in February. He said it is his professional duty to protest although he knows many Japanese are uneasy about doing so.

The 45-year-old told The Associated Press, "We're artists. We wouldn't exist if we didn't express ourselves." More than 20 artists have gathered for the project.

Some creators of anti-Olympics art say their freedom of expression has been restricted, even though public disapproval of the games is growing.

Designer Susumu Kikutake owns P&M clothing in Tokyo. He had been making anti-Tokyo games designs for his clothes even before the COVID-19 crisis. Back then, he was protesting corruption surrounding the Tokyo event. He received sharp criticism on the internet for his work and sold few pieces.

But during the recent increase in virus cases and public opposition to the Games, dissent, the artist says demand for his products has greatly increased. He sold 100 anti-Games clothing products in April and 250 in May.

Kikutake said the increase shows public displeasure against a lengthened state of emergency issued by the government.

Kikutake said, "My kids' sports events and school trips have been canceled, and we have forced to put up with it... but they say they can hold the Olympics." It angers him that the prime minister does not explain why they are holding the Games, Kikutake said. "He just keeps saying it will be ‘safe and secure,'" he added.

The Tokyo Games' organizing committee demanded Kikutake stop the production of clothing products. He said they argued that his work violates copyright laws. So, he created a new design that includes fewer Olympic circles and a misspelling of Tokyo as "Okyo."

Similar attempts to satirize the Tokyo Olympics have been suppressed by the Tokyo 2020 organizing committee, saying it was due to copyright issues.

The organizing committee told AP that protecting owned image rights is important for Olympic financers who have paid to use copyrighted Olympic images. The committee would not comment on individual cases, however.

Kantaro Komiya and Chisato Tanaka reported this story for The Associated Press. Gregory Stachel adapted it for VOA Learning English. Hai Do was the editor.

accumulate – v. to gather or acquire (something) gradually as time passes

pride – n. a feeling that you respect yourself and deserve to be respected by other people

ally – n. a country that supports and helps another country in a war