< Are ‘Mountains’ of Clothing Waste the New 'Height of Fashion?
Update Required To play the media you will need to either update your browser to a recent version or update your Flash plugin.
By Caty Weaver
02 October 2020


Sales of used clothing are part of fast fashion, but the industry is breaking down because of COVID-19 restrictions.

Fast fashion is a term for the manufacture and marketing of clothing that often looks like popular fashion creations. But fast fashion goods are mass produced and sold at low prices.

Fast fashion appeals to the many people who want to wear the latest styles from major designers but do not have enough money to buy them. The industry is worth about $35 billion a year. However, it depends on a complex process of used clothing sales.

Clothing re-sale and recycling helps prevent the fashion industry's growing amount of waste from going directly to landfills. It can also help many people clear out old clothing and shoes from their homes to make room for next season's designs.

But now, the system is facing a crisis.

Exporters are struggling, as are traders and buyers. Many buyers are from poorer nations and depend on a continuous supply of used clothes.

The signs are everywhere.

From London to Los Angeles, many used clothing stores and clothing banks have been filling up with more clothing than could be sold. Mountains of clothes are building up in storage centers.

Since the COVID-19 crisis began, clothing recyclers and exporters have had to cut prices as their supplies grew and health safety measures restricted movement and business.

"We are reaching the point where our warehouses are completely full," Antonio de Carvalho wrote to a client in June. De Carvalho is the head of a clothing recycling company in Stourbridge, England. The client had requested a price cut for clothing he collects.

De Carvalho pays towns for clothing collected in his containers then sells it to traders overseas. Since May, he says, he has had to cut the price for a ton of clothes from about $725 to about $515. He said that is making it hard for his company, Green World Recycling, to pay the costs of collecting and storing products.

Buyers were also asking to increase the credit period before they had to pay from 15 days to 45 to 60 days, de Carvalho wrote.

"We are losing ... a huge amount of money, making a big loss for the operation."

‘Going out of business'

De Carvalho's experience is shared across the industry, leading to expectations of a slow recovery even if the COVID-19 pandemic ends.

Recycling businesses are already taking steps in hopes of saving money. Reuters spoke to officials of 16 such companies in Britain, Germany, The Netherlands, and the United States. The officials reported that they are removing containers for clothing donations from streets and reducing the number of times these clothing banks are emptied. They also are considering dismissing some employees.

At the same time, donations have increased as many people stuck at home are clearing out old clothing.

"This is unlike any other recession in a century," said Jackie King. She leads the Secondary Materials and Recycled Textiles Association (SMART), a U.S. trade group. "I would anticipate there will be companies going out of business," she said.

Exports of used clothing have shrunk this year.

In Britain, the weight of used clothing exported from March to July was around half what it was for the same period last year, official trade reports show. Exports improved in July - the latest month on record - as countries began to re-open, but were still down around 30 percent.

In the United States, the value of exports from March to July fell 45 percent compared with the same period last year, government records show.

Up to a third of clothes donated in the United States – the world's biggest exporter of used clothing – ends up for sale in markets in the developing world. 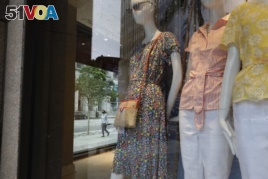 A passer-by walks past garments displayed on mannequins in a storefront window, Thursday, June 11, 2020, in Boston, Massachusetts. (AP Photo/Steven Senne)

The results of the drop in sales can be seen in some African countries.

On a recent day, business was slow in Gikomba, an open-air market in Nairobi, the country's capital. Gikomba is one of the biggest used clothes markets in East Africa.

Traders have been hit with an already shrinking supply, made even smaller by COVID-linked bans on clothing imports. And COVID restrictions and worries have meant more people are staying at home.

"Before coronavirus came in, I would manage to sell at least 50 trousers a day," said trader Nicholas Mutisya, who also sells hats. "But now with coronavirus," he added, "even selling one a day has become difficult."

The ban on textile imports ended in August. Yet the struggle continues for traders like Mutisya and Anthony Kang'ethe. He is a driver for a store selling used clothes shipped from Britain. Kang'ethe said the business had been hit hard by the supply crunch. "Before we used to have five workers in our company," he said. "We are left with two."

Fashion as an environmental enemy

Major trade in used clothing from Europe and the United States rose in the 1990s as demand for Western fashion increased in Africa and Eastern Europe.

Such demand has provided badly needed help for a growing fashion market. Clothing production has increased 100 percent over the past 15 years, reports the Ellen MacArthur Foundation, a British aid group.

In March of 2019, the United Nations Environment Programme reported the fashion industry was the second-biggest industrial user of water. It also noted that fashion businesses are responsible for up to 10 percent of carbon releases worldwide, more than international flights and shipping combined.

And old clothing represents a massive and growing amount of waste that ends up in landfills.

The U.S. Environmental Protection Agency says America produces just under 15.4 million tons of cloth waste a year. More than 65 percent of that waste goes to landfills.

The Reuters News Agency reported this story. Caty Weaver adapted it for VOA Learning English. George Grow was the editor.

fashion –n. the business of creating and selling clothes in new styles

style –n. a particular form or design of something

recycling –v. to make something new from (something that has been used before)

client –n. a person who pays a professional person or organization for services

anticipate –v. to think of something that will or might happen in the future

manage –v. to have control of (something, such as a business, department, sports team, etc.)

textile –n. the businesses that make textiles (cloth and clothing)