< Are Infinitives Really Verbs?
Update Required To play the media you will need to either update your browser to a recent version or update your Flash plugin.
By Alice Bryant
11 February 2021


On many Everyday Grammar programs, we have talked about a verb form called an infinitive.

Infinitives usually begin with the word "to" and are followed by a verb in its base form. An easy way to find an infinitive in a sentence is to look for the structure to + base verb. But, be careful! Not every phrase that begins with "to" is an infinitive. In fact, we use the word "to" in prepositional phrases, as in the sentence, "We went to the store." 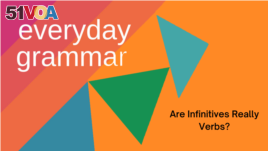 Although we sometimes call them "infinitive verbs," these word forms do not act as verbs at all. Instead, they can act like nouns, adjectives or adverbs. On today's program, we will talk about how infinitives act as different parts of speech.

Let's begin by talking about adjectives.

Just like a single-word adjective, when an infinitive acts as an adjective, it gives more information about a noun. In the following example, there are two nouns. Listen for the infinitive and think about which noun it is describing:

I sometimes buy magazines to read.

Which noun do you think the infinitive "to read" describes?

The answer is "magazine."

When infinitives act as adjectives, we call them adjectival infinitives.

Adjectival infinitives can also be longer phrases than just to + base verb. Listen to this example:

The only way to get that screw out is with a power tool.

In this case, the adjectival infinitive is "to get that screw out" and it describes the noun "way."

Now, let's find out how an infinitive can act as an adverb.

Infinitives are sometimes used to express a purpose. When they are, they carry the meaning of "for the purpose of" or "for the reason of." In other words, they tell us why someone does something.

Just like single-word adverbs, adverbial infinitives always describe verbs. Listen to this next example and try to identify the purpose the speaker gives for his action:

I watch Learning English videos to improve my listening skills.

Here, the infinitive is "to improve" but it is part of a longer phrase that acts as the adverb. So the full adverbial infinitive is: "to improve my listening skills." It tells us the reason the speaker watches Learning English videos.

Adverbial infinitives can also appear in other parts of a sentence, such as at the beginning. For instance, a speaker could say this:

To improve my listening skills, I watch Learning English videos.

And finally, we move to infinitives as nouns. We call them nominal infinitives.

When infinitives act as nouns, they can have several functions in a sentence. We will focus on them as direct objects and subjects. Nominal infinitives are generally part of longer phrases that, together, make a noun phrase.

Listen to this example and then I will tell you more:

I want to be a millionaire!

In this case, the nominal infinitive is part of a noun phrase that acts as the direct object. That phrase is "to be a millionaire."

Nominal infinitives can also act as subjects. But this sentence structure is neither common in everyday speaking nor in formal speech or writing. Generally, you will find it in creative writing and literature.

Listen to an example:

To write music was his passion.

Here, the noun phrase "to write music" (which includes the infinitive "to write") is the subject of the sentence.

Alright, we have covered a lot. Now we just have one more thing to quickly touch on: bare infinitives.

Bare infinitives do not have the word "to" in front of them. Often, you will see them used with modal verbs. For instance, in the sentence, "You must follow social distancing rules," the bare infinitive "follow" comes after the modal verb "must."

Well, that's our program for today. Listen or watch for infinitive verbs wherever English is used. And, for fun, you can ask yourself if the word is being used as a noun, adverb or adjective, or if it is a bare infinitive.

journey –n. traveling from one place to another; a trip

phrase -–n. a group of two or more words that express a single idea but are not a complete sentence

focus –v. to cause you attention to be directed at something

screw –n. a small, pointed metal device used to hold two materials, such as wood or metal, together

formal –adj. used in serious or official speech and writing

literature –n. written works such as plays, poems, and books

modal –adj. a verb usually used with another verb to express an idea of possibility, necessity or permission