< Are Artistic Advanced Degrees Worth the Cost?
Update Required To play the media you will need to either update your browser to a recent version or update your Flash plugin.
By Dan Friedell
18 September 2021


A recent story in the Wall Street Journal newspaper looked at students who went to celebrated universities such as Columbia and New York University in New York City, for advanced degrees in subjects like art, film and even social work.

Many of the students said they learned a lot. However, when they graduated, they were deep in debt and did not think they would find work that would let them pay back their loans. After graduation, many students reported owing over $100,000. Meanwhile, they were earning just $50,000 a year.

One student who received a Master of Fine Arts (known as an MFA) from Columbia, Matt Black, told the newspaper he was "financially hobbled for life" and owed lenders close to $300,000.

Students said they spoke with Columbia about the high cost of advanced arts degrees but never received a reasonable answer, the newspaper reported. Education experts say these schools are very wealthy, with large endowments, which could be used to pay students' tuition. The universities, however, prefer to ask the students to pay the full cost.

One famous school, Yale, is changing the system. Its theater program will be free to students after a $150 million donation from music and movie producer David Geffen.

The data for the Wall Street Journal story came from the United States Department of Education, and it was restricted to the two years after a student graduated. When representatives from the universities in the story were asked about their graduates' financial problems, many said two years is a short period of time. They said their graduates slowly increase their earnings over time.

In subjects like math, medicine, science and computer programming, advanced degrees are often required for first-year jobs. However, in more creative careers like writing, making movies or painting, people can be very successful without getting an advanced degree. 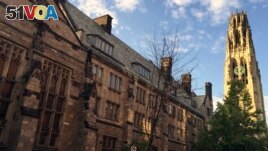 Kevin Carey is a higher education expert for New America, a public policy research center. He called master's degrees "a scam" in a conversation with the website Slate.com.

"Charging people a ton of money to go into any artistic career is often super problematic," he said.

Carey also said schools say "we need the money," when asked about the high cost of their master's degrees. But "everyone needs money," he said, adding it is a poor defense.

Even in careers like law or business, advanced degrees are no guarantee of financial success. The same Wall Street Journal writers looked at law school graduates from the University of Miami, in Florida. They saw recent graduates often borrowed $150,000 to go to law school. Two years after graduation, they were earning just $59,000.

Sergio Castillo is an actor in New York City. He said he owes so much money on his student loans that he no longer pays them.

He went to the University of California at Los Angeles and then earned an MFA from The Actors Studio in New York City. He does not expect to earn a lot of money from acting. Was his MFA worth the cost?

"I do think it was worth it. I don't put a price tag on my education or my experience. I think it's sort of unfortunate that so many people take for granted education. So many people, people like my mother, for example, never got to go to college."

Castillo said students who are thinking about an advanced degree in art should be sure they are doing it because they value the education, not because they want money or to be famous.

"There are a lot of other things you can do, don't go into it for that reason."

Lynne Adrine is a former television producer who runs the broadcast journalism graduate program in Washington, D.C. for Syracuse University.

She said students must ask an important question when they are thinking about graduate school.

"Is it worth the investment of all that money for that master's degree, and what is it going to turn into later?"

In some fields, people may have better experiences working as an assistant than spending money on graduate school.

Adrine warned that the cost of higher education in the U.S. is a serious issue.

"I just think that there's a there's a reckoning coming in terms of college tuition in general and the bang for the buck that one gets," she said.

Kasia Plazinska is a filmmaker in New York City. She came to the U.S. from Poland to study about 10 years ago.

She attended graduate school both at Baylor University in Texas and at the University of Iowa. She said she received a lot of financial support from those universities. When asked about the high cost of graduate school in the U.S., she described it with one word: "insanity."

"It is so insane. I mean, I know friends who are stuck with the debt. And literally they can't, they are not taking risks in life. Just even changing the job because they are so afraid."

Plazinska said arts graduate programs can help students meet and make friends with fellow artists with whom they can work throughout their careers. It's even better if the school is in a place like New York or Los Angeles.

Those interviewed did not have a solution for the problem of costly advanced degrees in creative subjects.

For school to be of value, Plazinska said, students need to remember why they started making art in the beginning.

"It's for just for the pure pleasure of creating and fulfilling myself this way."

Dan Friedell wrote this story for Learning English. Susan Shand was the editor.

Do you think people should go to graduate school if they want to work in the arts? Tell us in the Comments Section and visit 51VOA.COM.

degree –n. an official document and title that is given to someone who has successfully completed a series of classes at a college or university

social work –n. an official document and title that is given to someone who has successfully completed a series of classes at a college or university

hobbled –adj. the state of not being able to easily move forward or progress

endowment –n. a large amount of money that has been given to a school, hospital, etc., and that is used to pay for its creation and continuing support

take for granted –v. to believe or assume that (something) is true or probably true without knowing that it is true

fulfill –v. to make (someone or yourself) happy by achieving or doing something that was wished for

journalism –n. the activity or job of collecting, writing, and editing news stories for newspapers, magazines, television, or radio

reckoning –n. the act of judging something — usually singular

bang for the buck –n. used to describe how much value is received when money is spent

stuck –adj. in a place or situation that is difficult or impossible to get out of