< Are America’s Communities Disappearing?
Update Required To play the media you will need to either update your browser to a recent version or update your Flash plugin.
By Dan Novak
08 April 2021


"Won't you be my neighbor?" is a famous song from Mister Rogers' Neighborhood, a popular children's television show.

The show, broadcast for 31 years ending in 2001, sought to teach American children the importance of kindness and understanding towards others. The idea was that strong communities need strong relationships between the people in them.

But fewer and fewer Americans seem to know their neighbors and that may be eroding America's communities.

Marc Dunkelman wrote a book called "The Vanishing Neighbor." In it, he examined how American communities have changed over time. 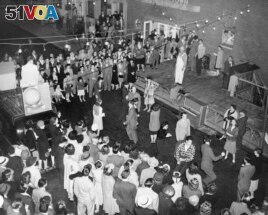 FILE - Greenwich Village in New York City, where anything can and generally does happen, held an old fashioned block party in which residents from all boroughs attended, June 21, 1946. (AP Photo/Ed Ford)

In his book, Dunkelman argued that people spend most of their time and attention on the inner and outer circles. But, he said the middle-circle is necessary to strengthening local communities. Relationships with neighbors are important for debate, hearing different ideas and finding compromise.

Brad Birzer is a professor of history at Hillsdale College in Michigan. He said Americans are now more connected with national communities than with local communities.

"We used to think of the community good as a local thing, and now we tend to think of it as the whole country," he said.

Americans used to have more middle-circle relationships. Face-to-face interaction was unavoidable without cell phones or the internet. People also felt more of an obligation to join community organizations.

Dunkelman argues that modern life has made middle-circle relationships less important. He said globalization, education and more women in the workforce have resulted in fewer middle-circle interactions. He said the weakening of communities has led to political divisions in America.

There are some good results from this change in personal interaction, however. It has become harder for hate groups like the Ku Klux Klan to organize at the local level. Doctors and health experts all over the world have been able to collaborate to deal with the coronavirus health crisis.

However, Americans may be losing what it means to be a good neighbor, as Fred Rogers of "Mister Rogers' Neighborhood" taught.

Today, society's problems like homelessness or poverty are not seen as local problems to solve, but national problems.

Doing good for a neighbor is healthy "not just for our neighbor, but for ourselves as well," Dunkelman said. Learning how to be a good citizen can be lost, he said, "when we defer the problem to somebody else."

Dora Mekouar reported this story for Voice of America. Dan Novak adapted it for VOA Learning English. Mario Ritter Jr. was the editor.

casual- adj. not formal; having some interest but not a lot ; not serious

unavoidable- n. not able to be prevented or avoided

obligation- n. something that you must do because of a law, rule, promise, etc

division- n. a situation in which different groups, countries, etc., have different opinions, beliefs, or ways of life that separate them from each other

alienate- v. - to cause (someone) to feel that she or he no longer belongs in a particular group, society, etc.

defer –v. to permit someone else to decide or choose something