< Arctic Ocean Ice Shrinks to Second Lowest Level on Record
Update Required To play the media you will need to either update your browser to a recent version or update your Flash plugin.
By Bryan Lynn
27 September 2020


Scientists say ice in the Arctic Ocean melted to its second lowest level on record this summer.

Arctic sea ice melts over the summer, reaching its lowest point sometime during September. Then, during the winter, ice builds up again and reaches its highest level in March.

The National Snow and Ice Data Center at the University of Colorado Boulder uses satellite imagery to observe and measure the ice levels.

The center recently announced its latest findings about sea ice levels at the North Pole, as well as areas off Canada, Greenland, Russia and the U.S. state of Alaska. 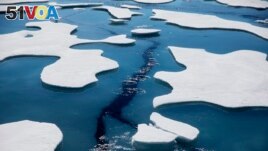 Researchers reported Arctic Ocean ice levels reached a summertime low of 3.7 million square kilometers on September 15. That is the second lowest level recorded since 1979, when satellite observations of the sea ice began.

Mark Serreze is director of the National Snow and Ice Data Center.

"It's been a crazy year up north, with sea ice at a near-record low," he told the French news agency AFP. He noted the heat waves and massive forest fires in the Siberian area of Russia.

He said the heat wave last spring and natural climate conditions in the Arctic played a part in the latest sea ice melt. He noted that temperatures for much of the year in the Siberian Arctic were 8 to 10 degrees Celsius above normal. Some of the warming was caused by the burning of coal, oil and natural gas, he added.

"Absolutely we're seeing climate change at work because the warm summers become warmer and the cold winters aren't as cold as they were," Serreze said.

Melting sea ice does not directly add to rising sea levels. But scientists say it can have a direct effect on rising temperatures.

"When the sea ice disappears, the incident sunlight gets absorbed in the ocean, helping to further warm the Earth," Claire Parkinson told AFP. She is a climate scientist with the U.S. space agency NASA.

Parkinson added that the lower ice coverage this year was "in line with the overall downward" patterns of the past 40 years.

"What we are seeing here in the Arctic is really the opening up of a new ocean on top of the world, which means that we need to be protecting the area," she added.

In another recent study, U.S. researchers suggested the Arctic has experienced such intense warming in recent decades that it is now changing to a completely "new climate state."

The study was carried out by the U.S. National Center for Atmospheric Research (NCAR). The researchers said Arctic sea ice has seen such major melting in recent decades that even an unusually cold year "will no longer have the amount of summer sea ice that existed as recently as the mid-20th century."

The study predicted that autumn and winter temperatures will also warm enough to enter a "statistically distinct climate" by the middle of this century. This will likely result in seasonal changes to include months when rain will fall instead of snow.

The scientists based their research on hundreds of detailed computer models and observations of Arctic climate conditions. They used this data to define climate conditions of what they considered the "old Arctic." The team then attempted to identify future climate changes linked to human-caused warming.

The study was based on high-end predictions for future levels of greenhouse gases, pollutants that trap heat in Earth's atmosphere. The researchers noted that lower greenhouse gas levels would lessen future climate changes in the Arctic.

Bryan Lynn wrote this story for VOA Learning English, based on reports from The Associated Press, Agence France-Presse and NCAR. Caty Weaver was the editor.

absorb – v. to take something in and hold it

statistical – adj. relating to statistics, a number that shows information about something