< Apple Announces First 5G Smartphone, iPhone 12
Update Required To play the media you will need to either update your browser to a recent version or update your Flash plugin.
By Bryan Lynn
14 October 2020


Apple has announced its first smartphones built to work with 5G, the world's fastest ever wireless technology.

While the new phones may have been long awaited by Apple fans, many users will not experience the reality of 5G anytime soon. This is because 5G networks are still being built in many parts of the world, including wide areas of the United States.

At a virtual release event on Tuesday, the company announced four versions of its latest device, the iPhone 12. The base model has the same display size as the iPhone 11 – 15.5 centimeters - but the new iPhone 12 is lighter and thinner. It sells for $800.

A much smaller version, called iPhone 12 Mini, has a 13.7 cm display. It is priced at $700. The company describes the Mini as "the world's smallest, thinnest, lightest 5G phone." 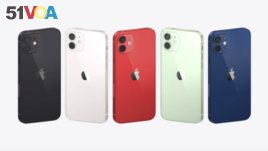 This image provided by Apple shows a display of the new iPhones equipped with technology for use with faster new 5G wireless networks that Apple unveiled Tuesday, Oct. 13, 2020. (Apple via AP)

The two devices also come equipped with a new three-dimensional, or 3D "LiDAR" sensor system. LiDAR is a technology that uses light lasers to scan areas and measure distances. Apple said users will be able to use the tool to create "depth maps" of whatever space they are in. LiDAR can also improve camera operations in low light situations and at night.

Pre-orders will begin October 16 for the iPhone 12 and iPhone 12 Pro in the United States, Britain, China and some other countries. The iPhone Mini and Pro Max will be available for pre-order on November 6 and will arrive in stores November 13.

The company said all its iPhone 12 models in the United States will support "millimeter wave" 5G, the fastest version of the technology, as well as mid and low band signals. Some competing Android devices support only the lower band versions of 5G.

Apple brought in the head of U.S. wireless carrier Verizon, Hans Vestberg, to explain the strength of 5G on its network. 5G promises much faster speeds for things like downloading movies and gaming on mobile devices. 5G is also expected to prevent internet slowdowns in high use areas.

Bob O'Donnell is head of TECHnalysis Research, a technology market research company. He told the Reuters news agency he thinks Apple may be setting users up for disappointment by drawing too much attention to the benefits of 5G.

Many users receiving their new 5G iPhones will only be able to experience small speed increases until wireless carriers fully build out their network systems, O'Donnell said. "I don't feel like Apple clarified that as much as they could have."

Still, many industry experts expect the new 5G devices to sell well since Apple has one of the world's most loyal and wealthy user bases. The iPhone remains at the center of Apple's business.

Competitors making Android devices – such as South Korea's Samsung and China's Huawei – began launching their 5G smartphones more than a year ago.

During its launch event, Apple also announced it was shrinking the size and price of its HomePod smart speaker. The new HomePod Mini – which is based on Apple's Siri assistant technology - will cost $100 and start shipping on November 16.

The smart speaker launch is seen as a move by Apple to catch up to Amazon and Google in the market for internet-connected home devices. Apple still holds only a small share of the market.

Experts say a big reason for Apple's low sales of its smart speaker is that its main HomePod device costs $300, while competing products from Amazon and Google cost as little as $50.

Bryan Lynn wrote this story for VOA Learning English, based on reports from The Associated Press, Reuters, Agence France-Presse and Apple. Hai Do was the editor.

three-dimensional - adj. appearing to have length, depth and width

scan – v. the act of scanning, or looking at all or part of something

disappointment – n. feeling unhappy about something that did not turn out as good as expected

clarify – v. make something easier to understand by explaining it