< Ancient Fish Surprises Scientists with Slow Growth, Long Life
Update Required To play the media you will need to either update your browser to a recent version or update your Flash plugin.
By Dan Friedell
21 June 2021

Scientists believe the fish first appeared 400 million years ago. But they thought it had disappeared completely until a living coelacanth was found off South Africa in 1938. 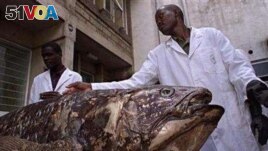 Scientists believe they got the average age of the ancient coelacanth fish wrong by a factor of five.

Then, experts thought for many years that the fish only lived to be about 20 years old. That would make the coelacanth one of the fastest-growing fish in the ocean.

But a recent study found that the ancient fish can live 100 years, meaning earlier estimates were off by a factor of five.

The study was published in the journal Current Biology.

At first, scientists counted the Coelacanth's age based on growth lines on the scales that form the fish's outer covering. Counting the growth lines gave earlier scientists the 20-year age estimate.

However, a group of scientists at France's marine research institute decided to look at the scales under a special, polarized light. This method is used to find out the age of fish sold for food.

The researchers realized that for every large line, there were five smaller lines. They said the smaller lines matched up better to one year of the fish's growth.

The scientists said the oldest specimen they have is 84 years old. Some fish grow to be about two meters long and they can weigh 90 kilograms or more. That means the coelacanth is one of the slowest-growing fish in the ocean.

The scientists also studied two preserved embryos. They found that female coelacanths carry babies for at least five years before giving birth. The female fish are not able to have babies until they are over 50 years old.

Harold Walker is an ocean expert who did not work on the study. He described the discovery about the embryos as "very strange."

Because the fish are endangered, scientists can only study ones that are already dead and preserved. They are not permitted to catch live fish.

After being rediscovered in waters off South Africa, Coelacanths have mostly been found in the Indian Ocean close to Africa.

Seth Borenstein wrote this story for the Associated Press. Dan Friedell adapted it for Learning English. Mario Ritter, Jr. was the editor.

What would you do if you ever found a Coelacanth in the ocean? Tell us in the Comments Section and visit 51VOA.COM.

factor - n. an amount by which another amount is multiplied or divided

scales –n. (pl.) small, thin plates that cover the bodies of some animals including fish and reptiles

specimen –n. something (such as an animal or plant) collected as an example of a particular kind of thing

preserve- v. to keep (something) in its original state or in good condition

endangered –adj. used to describe a type of animal or plant that has become very rare and that could die out completely