< America's People and American People
Update Required To play the media you will need to either update your browser to a recent version or update your Flash plugin.
By Alice Bryant
27 August 2021


This week on Ask a Teacher, we answer a question from Shohei from Japan. He says: 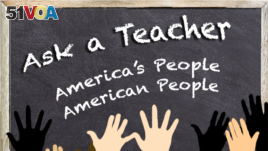 The two phrases have the same general meaning. Both describe people who are from America or are living in America. But there are a few minor differences.

One difference between the phrases is their grammar.

The word "America's" is a proper noun in possessive form. A proper noun is a particular name for a person, place or thing. The apostrophe -s after "America" shows possession. So, "America's people" means the people of, or belonging to, America.

"American people" is the more common way to describe people who are born in America or become American citizens.

On the other hand, the phrase "America's people" is more literary. It is most often found in publications and documentary films, and on things like historical websites.

There is also one small difference in meaning:

"America's people" can mean everyone who lives in America, including some who may not officially be U.S. citizens. It can also refer to the nation's immigrant history. So, when a publication or film uses the phrase, they may talk about the many immigrant groups that make up the nation.

Alice Bryant wrote this lesson for Learning English. Caty Weaver was the editor.

gap - n. a difference between two people or things

phrase - n. a group of two or more words that express a single idea but do not usually form a complete sentence

particular - adj. a specific person or thing that is being referred to

apostrophe - n. the punctuation mark used to show that letters or numbers are missing

literary - adj. concerning the writing, study, or content of literature