< Aluminum Wrap Used to Protect California Homes, Trees from Wildfires
Update Required To play the media you will need to either update your browser to a recent version or update your Flash plugin.
By Ashley Thompson
22 September 2021


American Martin Diky says he panicked recently when a huge wildfire began racing down a hill toward his home in Northern California.

He did some quick research to learn how how he might protect his $700,000 mountain home near Lake Tahoe. He chose to cover his house with a product called fire wrap. Fire wrap is made with the soft metal called aluminum. The special aluminum covers withstand very high heat for short periods of time.

Diky bought $6,000 worth of fire wrap from a California-based company called Firezat Inc. That was enough to cover his 130-square-meter home on the edge of the small California community of Meyers.

The fire wrap is very costly, Diky said, "and you'd feel stupid if they stopped the fire before it got close," he added. "But I'm really glad we did it."

Fire wrap is not widely used by homeowners in America. Along with the high cost, it is difficult to put in place. But the material has saved properties, including small historic houses, or cabins, owned by the U.S. government.

It can even be used to protect the living. This week, firefighters in California's Sequoia National Park covered the base of the world's largest tree with the aluminum. The tree, known as The General Sherman, is thousands of years old and stands in the park's Giant Forest area. 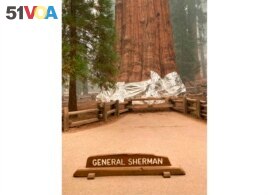 This photo provided by the Southern Area Blue Incident Management Team, Sept. 16, 2021, shows the giant sequoia known as the General Sherman with its base wrapped in a fire-resistant blanket to protect it from approaching wildfires at Sequoia National Forest.

Protective aluminum wrapping can deflect temperatures as high as 550 degrees Celsius. Any structure underneath the wrap stays cooler. This helps prevent fire-linked explosions. It also keeps small, pieces of burning material, or embers, from entering small openings in buildings.

Firezat's biggest customer is the U.S. government. The Forest Service and the National Park Service are responsible for about 95 percent of the company's sales.

Dan Hirning is Firezat's president. He estimates the Forest Service has wrapped 600 to 700 buildings, bridges, other structures and trees on its sites just this year.

Firefighters on social media have compared the shiny, silver-colored wraps to a "big baked potato." One firefighter who helped cover some structures said it felt like he was wrapping Christmas gifts.

Fumiaki Takahashi is an engineering professor at Ohio's Case Western Reserve University. In 2019, he published a report about the effectiveness of wraps used for wildfire protection. He said they "demonstrated both remarkable performance and technical limitations."

The wrapping is most effective if a wildfire moves quickly beyond the structure, he said. It is less effective in areas with many houses.

The wraps "show promise in being effective," he said. But additional research is needed to develop more effective and lightweight versions, Takahashi said in an email to The Associated Press. He said he would not suggest the products for use by everyone because wrapping correctly is still a complex process. But, once a dependable wrapping method is in place, he said, he would call for wider public use.

Firezat Inc. sells its fire wrap rolls for $700 each. They are 1.5 meters wide by 61 meters long. Getting a structure wrapped usually costs thousands of dollars for labor.

Hirning said most individual buyers he has had over the years are looking to protect, in his words, "really expensive homes." They include homeowners in Malibu, California, who are asked to sign an agreement that the Forest Service is not responsible for protecting their property in some cases.

As for sales increasing as a result of recent wildfires, Hirning said that it is an extremely seasonable business. Once it starts raining and snowing, he says he often does not sell anything for nine straight months.

That could change, however, as climate change leads to more extreme and destructive weather and a longer wildfire season.

panic - v. to be overcome with extreme fear : to be affected by panic

withstand - v. to not be harmed or affected by (something)

deflect - v. to cause (something that is moving) to change direction

customer - n. someone who buys goods or services from a business

remarkable - adj. unusual or surprising : likely to be noticed