< Airlines Cancel, Change Flights to US over 5G Dispute
Update Required To play the media you will need to either update your browser to a recent version or update your Flash plugin.
By Hai Do
19 January 2022


Several airlines canceled flights to the United States or changed planes they were using because of concerns about the new 5G service in the country.

The airlines said they were warned that the widely used Boeing 777 aircraft was especially at risk of radio interference by the new high-speed wireless service.

FlightRadar24 is a service that provides information about aircraft and flights around the world. It reported that the Boeing 777 was the second-most used wide-body plane on flights to and from the U.S. last year with around 210,000 flights. 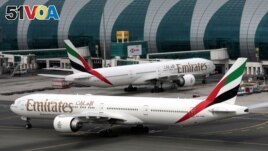 FILE - Emirates Airline Boeing 777-300ER planes are seen at Dubai International Airport in Dubai, United Arab Emirates, February 15, 2019. Several airlines canceled flights to the U.S or changed planes they were using because of concerns about the new 5G service.

Emirates is the largest user of the Boeing 777 plane for long-distance flights. The carrier said Wednesday that it would suspend several flights to the U.S. because of "concerns associated with the planned deployment of 5G mobile network services in the U.S." It said it would continue flights to Los Angeles, New York, and Washington.

Other carriers, including Singapore Airlines, Air India, Korean Air Lines, Japan Airlines, and Germany's Lufthansa, said they will change to other planes on flights to the U.S.

The airlines said they made the changes after being informed that 5G signals "may interfere with the radio altimeter installed on the Boeing 777."

But Air France said it planned to continue flying its Boeing 777s into American airports. It did not say why it made its decision. Qatar Airways, Israel's El Al, and Abu Dhabi's Etihad Airways also said their services had not been affected.

The cancellations and changes came as AT&T and Verizon started 5G service in the U.S. on Wednesday. The phone companies have delayed the start of the high-speed networks two times since early December.

The 5G network runs on a radio spectrum known as the C band which airline companies say could interfere with the operation of some altimeters. An altimeter sends radio waves from an airplane to the ground to measure how far above the ground an airplane is traveling. Pilots use it to help with landing planes, especially during bad weather.

Similar 5G networks have been deployed in Europe and South Korea with no reports of interference. In France, 5G network providers reduce the power of 5G transmitters to avoid interference.

In the U.S., there are two different agencies with different responsibilities for airline safety and communication.

The FCC has established that the C band used by 5G networks will not affect the radio spectrum used by airlines. And AT&T and Verizon have said their equipment will not interfere with aircraft electronics.

The FCC's chairwoman said in a statement that the 5G "deployment can safely co-exist with aviation technologies in the United States, just as it does in other countries around the world."

The FAA has already cleared several aircraft to fly into airports with 5G signals, but the Boeing 777 is not on the list. The agency has said it will permit planes with modern, dependable altimeters to operate around high-power 5G. But planes with older altimeters will not be permitted to make landings under low-visibility conditions.

But the FAA said signal strength and the transmitting direction of 5G towers could be the problem. The FAA said in December, "Base stations in rural areas of the United States are permitted to emit at higher levels in comparison to other countries which may affect radio altimeter equipment...."

Boeing said it was working with all parties on a "data-driven solution for the long-term that ensures all commercial airplane models can safely operate as 5G is deployed."

Hai Do adapted this story for Learning English based on reporting from The Associated Press and Reuters.

install - v. to make a device ready to be used in a certain place

low-visibility - adj. a condition with limited ability to see clearly

transmit - v. to send in the form of electrical signal to radio, television, etc...

commercial - adj. used in the buying and selling of goods and services