< Air-to-Water Machines Available in Dry Area of US
Update Required To play the media you will need to either update your browser to a recent version or update your Flash plugin.
By Anna Matteo
10 October 2021


If a machine could make water out of air but cost a lot of money, would you buy it? In very dry parts of California, some homeowners are doing just that.

The air-to-water system works like an air conditioner by using coils to cool air. It then collects water and drops it in a container. The water is then cleaned to make it safe to drink.

"Our motto is, water from air (is not) magic, (it is) science, and (that is) really what (we are) doing with these machines," said Ted Bowman. He is a design engineer at Washington state-based Tsunami Products and helped to design the machine.

The system is one of several that have been developed in recent years to remove water from the air.

The machines are made for use at homes, offices, farms ... just about anywhere. The technology works especially well in foggy areas. Machines come in different sizes. The largest can produce about 8,600 liters of water a day.

Even though the cost is high, some homeowners in California are buying them to meet their water needs. California is experiencing one of the worst droughts in recent history. The water supply there is extremely low and people have been asked to save water. 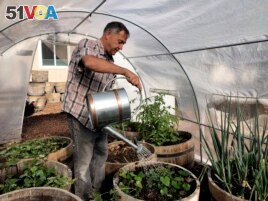 Don Johnson waters plants in his greenhouse using water from his air-to-water system installed by Ted Bowman, a design engineer with Tsunami Products, in his backyard in Benicia, Calif., on Sept. 28, 2021. (AP Photo/Haven Daily)

Don Johnson lives in California and bought the smallest machine. It looks like a large air conditioning unit. He said he hoped it would produce enough water to keep his garden alive. He found, however, that it produces more than enough water for use in his garden and house.

"This machine will produce water for a lot less than you can buy bottled water ... for," he said. Johnson added that as the cost of water goes up, he thinks the machine will pay for itself.

Besides the high price, the machine also needs a lot of energy to run. But Johnson said the solar panels on the roof produce enough power to operate the machine without adding energy costs.

Some experts say the technology makes sense for individual homeowners, especially in rural areas. But it may not be a good solution for all of California.

One such expert is Helen Dahlke, a researcher with the University of California, Davis. She said the most important thing is to fight global warming to prevent future droughts. She said the world needs to slow climate warming to really make a difference.

Haven Daley reported this story for the Associated Press. Anna Matteo adapted it for VOA Learning English. Caty Weaver was the editor.

air conditioner – n. a system for controlling the humidity, ventilation, and temperature in a building or vehicle, typically to maintain a cool atmosphere in warm conditions.

coil – n. a series of connected pipes in rows, layers, or windings

motto – n. a short sentence or phrase that expresses a rule guiding the behavior of a particular person or group

humidity – n. a moderate degree of wetness especially of the atmosphere

drought – n. a period of dryness especially when prolonged

solar panel – n. a battery of solar cells (as on a rooftop)

roof – n. the cover or top of a building, vehicle, etc.