< After US Vaccine Mandate, Workers Rush for Religious Exemptions
Update Required To play the media you will need to either update your browser to a recent version or update your Flash plugin.
By Dan Friedell
23 September 2021


U.S. President Joe Biden announced new rules on September 9 that require certain people to get a COVID-19 vaccination. One part of the announcement said businesses that employ 100 people or more must ask their employees to get vaccinated or require them to show a negative virus test once per week.

The rules will affect about 100 million Americans.

However, Biden also said people may choose not to be vaccinated due to their religious beliefs. This is known as a religious exemption. 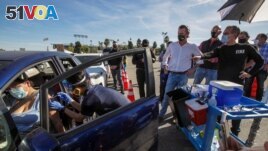 In Arkansas, so many employees of a hospital are claiming the exemption that the hospital says they are "bluffing."

In the past, not many people used religious beliefs as a reason to avoid vaccinations. But the COVID-19 pandemic is different. Even though the vaccines are safe, protective and widely available in the U.S., many people do not want to get them. Now people are claiming the religious exemption.

Many religious leaders do not object to the vaccines.

There has been some concern, however, over the cell-line used by the Johnson and Johnson vaccine. The Janssen vaccine uses cells grown in a lab that came from a fetus in 1985. Johnson and Johnson has said repeatedly there is no fetal tissue in its vaccine.

The Catholic church said it is "morally acceptable" for Catholics to receive vaccines that come from fetal cell research. Pope Francis said not getting a vaccine would be "suicide." He received the vaccine made by Pfizer-BioNTech.

The White House said it understands people may use religion as a reason to refuse the vaccine. However, it argues, if the new rule makes more people say yes, it will save lives.

In the first part of September, about 1,000 people died each day in the United States from COVID-19.

In Los Angeles, Mayor Eric Garcetti said: "we will not tolerate the abuse of these exemptions by those who simply don't want to get vaccinated." People who work for the city must be vaccinated by October 5. A group of police employees who do not want the vaccine is taking legal action.

In the state of Washington, Governor Jay Inslee said state employees may lose their jobs if they are not vaccinated by October 18, unless they receive an exemption. However, receiving an exemption does not guarantee people will stay employed.

The state will decide if people who are not vaccinated can still do their job without putting others at risk.

Other large employers in the U.S., including United Airlines, said people who get an exemption will not be permitted to work until new COVID-19 testing plans are put into effect.

Jackson Lahmeyer is the leader of a church in Tulsa, Oklahoma. He is offering a "religious exemption" form on his church's website. In only three days, more than 35,000 people downloaded the form. They can bring it to their own religious leaders or, if they join the church in Oklahoma and donate money, Lahmeyer will sign it.

"We're not anti-vaxxers. We're just pro-freedom," Lahmeyer said. He added that he does not think it is right for someone to lose their job if they do not want the vaccine.

Colleen Long and Andrew DeMillo wrote this story for the Associated Press. Dan Friedell adapted it for Learning English. Susan Shand was the editor.

Do you think people who go without the vaccine should be able to keep working? Tell us in the Comments Section and visit 51VOA.COM.

negative –adj. not showing the presence of a particular germ, condition, or substance

tolerate –v. to allow (something that is bad, unpleasant, etc.) to exist, happen, or be done

bluff –v. a false threat or claim that is meant to get someone to do something