< Afghans Who Helped the US Now Fear Being Left Behind
Update Required To play the media you will need to either update your browser to a recent version or update your Flash plugin.
By Susan Shand
20 May 2021


Ayazudin Hilal worked as an interpreter alongside U.S. soldiers on hundreds of patrols and firefights in eastern Afghanistan. He earned a medal recognizing his work and an American commander also praised his efforts in a letter.

But when he asked for one of the few special visas that would permit him to go to the United States, he was told ‘no.' 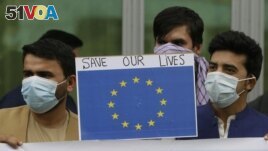 In this Friday, April 30, 2021, photo former Afghan interpreters hold placards during a protest against the U.S. government and NATO in Kabul, Afghanistan. (AP Photo/Mariam Zuhaib)

Now, as American and NATO forces prepare to leave the country, he and thousands of others who worked with American troops are afraid. They fear they will be targeted by the Taliban.

"We are not safe," the 41-year-old father of six said. "The Taliban is calling us and telling us, 'Your stepbrother is leaving the country soon, and we will kill all of you guys.'"

The future of interpreters after the troop withdrawal is one of the many uncertainties surrounding the withdrawal. Will the Taliban return? Will women lose the rights they have gained? Will the country's security situation worsen and terrorist threats rise?

Interpreters and other Afghans who worked for the U.S. government or NATO can get what is known as a special immigrant visa, or SIV. The visa program was created in 2009. It is similar to a program that was created for Iraqis.

Both SIV programs have long received criticism. The paperwork is long, with security concerns slowing the process even more. The pandemic has made the whole system even more difficult.

U.S. Secretary of State Antony Blinken said last month that the U.S. is committed to helping interpreters and other Afghans who aided the war effort. Many, he said, took great risks to help the U.S. The Biden administration has launched an investigation into SIV programs. Investigators are looking at reasons for the delays, as well as possible corruption and other issues.

Former interpreters are becoming increasingly public about what they fear would happen under Taliban leaders.

"They absolutely are going to kill us," Mohammad Shoaib Walizada said after joining others in a protest in Kabul. He is a former interpreter for the U.S. Army.

At least 300 interpreters have been killed in Afghanistan since 2016. The Taliban have made it clear they will continue to be targeted, said Matt Zeller. He is a co-founder of No One Left Behind, an organization that works for the rights of those who aided the U.S. Army. He also served in the country as an Army officer.

"The Taliban considers them to be literally enemies of Islam," said Zeller, adding "There's no mercy for them."

Members of Congress and former service members have also urged the U.S. government to fix the SIV process, which now takes more than three years. State Department spokesperson Ned Price said last week that the U.S. Embassy in Kabul had increased employees to help with the visa requests.

In December, Congress added 4,000 visas. That brings the total number of Afghans who can come with their family members to 26,500. About 50 percent have been given out and 18,000 more have been requested.

Critics and those who work with refugees said the need to help Afghans could sharply increase if the country falls into chaos.

As it is, several warlords that were supported by the United States and NATO threaten the country's future, along with the Taliban. Afghan security forces are weak and poorly equipped to fight both threats.

Noah Coburn is an expert on Afghanistan at Vermont's Bennington College. While praising the Biden administration's attempts to fix the visa system, he told The Associated Press he thinks the entire program needs to be rebuilt.

"If they are not willing to sort of rethink the entire thing, they are not going to actually start helping those Afghans who are most at need," Coburn said.

He estimates there could be as many as 300,000 Afghans who worked for the U.S. or NATO in some form over the last 20 years.

Recently, there have been killings of Afghan government workers, reporters and others. The Islamic State has claimed responsibility for some of the deaths, while the Taliban and the Afghan government blame each other.

Former interpreters have support in Congress, in part because many also have the support of former American troops.

Walizada, for example, provided a letter of support from an Army sergeant who worked with him in many patrols, including one where the interpreter was wounded by Taliban gunfire.

"I cannot recall a linguist who had a greater dedication to his country or the coalition cause," the sergeant wrote.

At first, Walizada was approved for a visa. But then the U.S. Citizenship and Immigration Services told him it had harmful information "you may be unaware of," in a letter he showed the AP. His visa was denied. Walizada has appealed the decision.

interpreter – n. a person who translates the words that someone is speaking into a different language

literally – adv. having the real or original meaning of a word or phrase

mercy – n. kindness that makes you forgive someone

chaos – n. a situation in which there is no order

warlord – n. the leader of a military group who is not officially recognized and who fights against other leaders, groups, or governments

linguist – n. someone who is good at learning foreign languages

dedication – n. a willingness to give a lot of time and energy to something because you believe it is important

We want to hear from you. Write to us in the Comments Section, and visit 51VOA.COM