< Afghanistan’s Drug Trade Helps Taliban
Update Required To play the media you will need to either update your browser to a recent version or update your Flash plugin.
By John Russell
17 August 2021


The United States spent more than $8 billion over 15 years on efforts to keep the Taliban from making money from Afghanistan's drug trade. 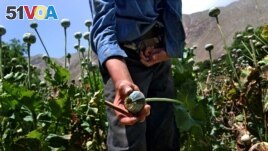 As the United States ends its longest war, Afghanistan is still the world's biggest illegal opiate supplier and looks likely to remain so in the near future.

Some U.N. and U.S. officials worry about even higher opiate production – and how such production might help further finance the Taliban.

"Largest industry except for war"

Three of the last four years have seen some of Afghanistan's highest levels of opium production, reported the U.N. Office of Drugs and Crime, or UNODC. Even as the COVID-19 health crisis went on, poppy growing increased 37 percent last year, the UNODC reported in May.

The estimated, all-time high for opium production was set in 2017 at some $1.4 billion in sales by farmers. That number represented roughly 7 percent of the goods and services produced in Afghanistan, the UNODC reported.

Barnett Rubin is a former State Department adviser on Afghanistan.

Rubin described drugs as Afghanistan's "largest industry except for war."

Despite the threats presented by Afghanistan's illegal drug business, experts noted, the United States and other nations rarely discuss in public the need to address the trade.

UNODC estimates Afghanistan's output to be more than 80 percent of the worldwide opium and heroin supplies.

The Taliban and public officials have long been involved in the drug trade, experts said. Some, however, dispute the amount of the Taliban's involvement.

The United Nations and Washington say the Taliban are involved in all parts of drug production, taxation and shipping.

U.N. officials report that the Taliban likely earned more than $400 million between 2018 and 2019 from the drug trade. A May 2021 U.S. Special Inspector General for Afghanistan, or SIGAR, report quoted a U.S. official as estimating the Taliban get up to 60 percent of their yearly money from illegal drugs.

Some experts dispute that information.

David Mansfield is a leading researcher on Afghanistan's drug trade. He says his studies show the most the Taliban can earn from drugs is about $40 million each year, mainly from taxes on drug production and drug shipments.

The Taliban, he said, make more charging money for legal imports and exports.

Washington spent an estimated $8.6 billion between 2002 and 2017 to hurt Afghanistan's drug trade. The goal was to deny the Taliban financing, said a 2018 SIGAR report. Apart from destroying poppies, the United States and allies backed raids, airstrikes on suspected drug labs and other measures.

Experts said the measures only created anger toward the government in Kabul, and its foreign backers, among farmers and workers who depend on opium production to feed their families.

The Taliban learned that lesson from their ban on poppy growing in 2000, said Brookings Institution Afghan expert Vanda Felbab-Brown.

Despite a large decrease in production, the ban created "a huge political storm against the Taliban and it was one reason why there were such dramatic defections after the U.S. invasion," she said.

So, experts said, it is unlikely the Taliban will forbid poppy growing.

Mansfield said that a future government will need to move carefully to avoid angering its rural base "and provoking resistance and violent rebellion."

Jonathan Landay reported on this story for Reuters. John Russell adapted it for Learning English. Susan Shand was the editor.

opiate – n. a drug (such as morphine or codeine) that is made from opium and that is used to reduce pain or cause sleep

poppy – n. a type of plant that has bright red or orange flowers and that is the source of opium

defection – n. the act of leaving a country, political party, organization, etc., and going to a different one that is a competitor or an enemy