< Afghan Relics Returning Home
Update Required To play the media you will need to either update your browser to a recent version or update your Flash plugin.
By Dan Novak
28 April 2021

U.S. officials seized 33 Afghan pieces worth $1.8 million from a New York art collector. Officials say the man stole artifacts from countries all over the world.

Roya Rahmani is Afghanistan's ambassador to the U.S. She says the recovery of the material is extremely important to the country's culture.

"Each one of these pieces are priceless depictions of our history," she said.

The Manhattan District Attorney along with the U.S. Department of Homeland Security recovered the artifacts as a part of an investigation into the illegal sale of antiquities. Rahmani formally took back the pieces from the U.S. on April 12.

The items include masks and sculptures, some from the second and third centuries. They were on display for a short period of time at the Afghan embassy in Washington, D.C. They will be placed in the Afghanistan National Museum in Kabul.

The National Museum of Kabul is the place where members of the Taliban destroyed artifacts in 2001. The group believes human images are offensive.

The Taliban is now out of power, but it controls much of the country outside of Kabul. Peace talks between the Taliban and the Afghan government have slowed down, and U.S. and NATO troops are expected to leave the country after 20 years of war. 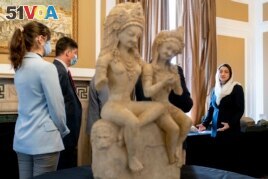 Afghan Ambassador to the U.S. Roya Rahmani, right, accompanied by embassy staff, speaks as she gives the Associated Press a tour at the Afghanistan Embassy in Washington, Wednesday, April 21, 2021

Rahmani says it's a dangerous time for the country.

"However, what I know is that our security forces are determined to defend our people. The government is committed to do its part for peace," she said.

Before 9/11, the Taliban had become infamous for its strict form of Islamic law. Under the Taliban, most art and culture was banned, and women were not allowed in public. In 2001, the Taliban destroyed sixth century statues of the Buddha built into the side of a cliff in Bamiyan province.

Rahmani says the items are returning to an Afghan government that respects their culture and history. She says the Taliban would never destroy the precious artifacts again.

"Our security forces and our government would not let that happen," she said.

Like the statues, some of the recovered antiquities are of the Buddha. There's also a statue of Shiva and a Greek mask.

Fredrik Hiebert is an archaeologist who is an expert on Afghanistan. He says the artifacts show the many cultural influences on the country, which was once a worldwide center for trade.

"Afghanistan is one of the richest countries in archaeology and history in the world," he said. "For 6,000 years there's been civilization based in Afghanistan."

That makes Afghanistan a good target for those who want to steal.

Homeland Security Investigations (HSI) is a government agency that deals with cases of smuggling across international borders. In 2007, it received information about stolen artifacts brought to the New York City area from India.

Eventually, New York art gallery owner, Subhash Kapoor, and seven others were brought up on smuggling charges. The government took back more than 2,600 artifacts worth more than $140 million.

For now, the U.S. government is working to return the stolen material, much of it found around New York City.

HSI has already returned items to Nepal and Sri Lanka and soon will turn over artifacts to Thailand.

Stephen Lee is in charge of HSI's cultural property, arts and antiquities unit. The 33 items being sent to Afghanistan are the first to return as part of the investigation.

"They belong to the people of Afghanistan," Lee said. "That's their cultural history."

Ben Fox wrote this story for the Associated Press. Dan Novak adapted it for VOA Learning English. Susan Shand was the editor.

artifact –n. a simple object (such as a tool or weapon) that was made by people in the past

depict–v. to show (someone or something) in a picture, painting, photograph, etc.

mask–n. a covering for your face or for part of your face

sculpture-n. a piece of art that is made by carving or molding clay, stone, metal, etc.

vow-n. a serious promise to do something or to behave in a certain way

loot-n. something that is stolen or taken by force

civilization-n. the condition that exists when people have developed effective ways of organizing a society and care about art, science, etc.

smuggle-v. to move (someone or something) from one country into another illegally and secretly