< Activists: Native People Are Best Caretakers of the Amazon Area
Update Required To play the media you will need to either update your browser to a recent version or update your Flash plugin.
By Mario Ritter Jr.
10 October 2021


Environmental activists say protecting native people and their right to ancestral lands is critical to saving the rainforest in Brazil. The activists argue that the Amazon natives are its best guardians.

The activists spoke Monday at a Reuters Impact conference about the future of the Amazon rainforest. They said the government of Brazilian President Jair Bolsonaro is weakening the rights of natives.

"What we are seeing is an attack on indigenous people, on their rights, their lives and territories," said Leila Salazar-Lopez. She is the head of Amazon Watch, an environmental group based in Oakland, California. 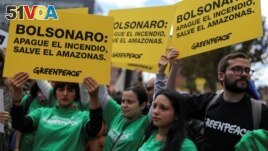 FILE - Demonstrators hold placards that read "Bolsonaro: extinguish the fire, save the Amazon" during a protest outside the Brazilian embassy due to the wildfires in the Amazon rainforest, in Bogota, Colombia August 23, 2019. (REUTERS/Luisa Gonzalez)

Ginger Cassady is director of the Rainforest Action Network based in San Francisco. She said the actions of the Bolsonaro government have continued to increase deforestation. She said the government is decreasing environmental protections although it has promised to protect the forest.

Deforestation of the Brazilian Amazon area has risen sharply since Bolsonaro took office in 2019. Early data show forest clearing decreased by 1.2 percent from January to August. But destruction remains at a level not seen in Brazil since 2008.

Bolsonaro spoke at the United Nations General Assembly last month. In his speech, he promised to increase resources for environmental enforcement by 100 percent. The environment minister said last month that hundreds of enforcement agents would be added to the fight against illegal deforestation.

But critics say the government has reduced spending on environmental efforts for years.

Both Salazar-Lopez and Cassady have urged banks and other investors to respect indigenous land rights. They want financial interests to get the permission of native communities before they start projects that influence their lands.

The activists called on private industry to stop the expansion of oil concessions in the Amazon. The rainforest around the Amazon River in South America is the world's largest. It is also considered very important to fight climate change.

Salazar-Lopez said forests were being cut down on purpose to clear land for cattle and soybean farms. She said the government's indigenous affairs agency, called Funai, has decreased under Bolsonaro. This has left indigenous areas unprotected and in danger of illegal operations to cut down trees and to mine gold.

"Indigenous people are the best protectors of the Amazon forest and of biodiversity around our planet...because they have intrinsic spiritual and cultural connections to the land," Salazar-Lopez said.

"They have the most to lose and so they will do anything to protect the land, which is everything to them," she said.

Indigenous territories make up about 30 percent of the Amazon, which are among the best protected lands in the area. Another 20 percent are protected areas under the care of the federal government.

indigenous –adj. living naturally in a particular place or area

concession –n. the right to sell something or do business on property that belongs to the government or to another company or person

biodiversity –n. the existence of many different kinds of plants and animals in an environment

intrinsic –adj. belonging to the very basic nature of a thing; happening as a natural part of something