< A Turkish Man’s Long Friendship with a Swan
Update Required To play the media you will need to either update your browser to a recent version or update your Flash plugin.
By Armen Kassabian
11 February 2021


Most people who keep animals choose to have dogs, cats, fishes or small birds. But, Recep Mirzan keeps a different animal on his farm in Western Turkey.

The 63-year-old retired postal worker has a swan, a large and long-lived bird found in many parts of the world. 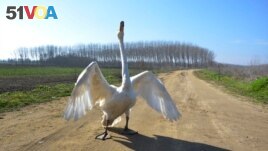 Garip is a female swan that was rescued 37 years ago by Recep Mirzan, a 63-year-old retired postman. (AP Photo/Ergin Yildiz)

Mirzan rescued the swan from a dangerous situation many years ago. Mirzan and a group of friends were driving in their car when they saw an injured swan with a broken wing. Mirzan immediately took the swan with him to protect her from predators. He kept her in the car until that afternoon when he was able to take the swan to his home.

"Since I love animals, I said to myself that I should take her home instead of leaving her as prey," Mirzan told The Associated Press.

He named the swan Garip. It means "strange" in the Turkish language but is also used to describe a person who has had difficulties in their life. After Garip's broken wing improved, she remained with Mirzan. Mirzan is not married and has no children, so the swan is like a child to him.

When Garip is out of her pen, an area that is used to keep her protected, she follows Mirzan wherever he goes. Garip has been living on Mirzan's farm in the Karaagac area of Turkey, bordering Greece, for the past 37 years.

Garip has never tried to run away from Mirzan's farm.

According to the group Swan Sanctuary, in Britain, swans live in the wild for only about 12 years. But in protected environments, they can live up to 30 years.

Erhin Yildiz and Robert Badendieck from The Associated Press reported this story. Armen Kassabian adapted it for Learning English. Mario Ritter, Jr. was the editor.

postal – adj. relating to or involved in the sending, handling, and delivery of mail

predators – n. an animal that lives by killing and eating other animals

prey – n. an animal that is hunted or killed by another animal for food

sanctuary – n. a place where someone or something is protected or given shelter

Have you ever rescued an animal and kept it as a pet? We want to hear from you. Write to us in the Comments Section.