< A Robot’s Gaze Can Affect the Human Brain
Update Required To play the media you will need to either update your browser to a recent version or update your Flash plugin.
By Dan Novak
12 September 2021


Have you ever made eye contact with a robot?

It can be a very strange experience. Scientists even have a name for the feeling: the "uncanny valley."

Now, researchers at the Istituto Italiano di Tecnologia (IIT) in Italy have found that it is more than just a feeling. They ran an experiment that showed how a robot's gaze can trick people into thinking they are socially interacting with a human being. That experience can slow a person's ability to make decisions. 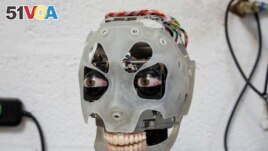 The head of Ai-Da, a humanoid robot capable of drawing people from life using her bionic eyes and hand, is seen in the offices of robotics company Engineered Arts, in Falmouth, Cornwall, Britain. (REUTERS/Matthew Stock/File Photo)

"Gaze is an extremely important social signal that we employ on a day-to-day basis when interacting with others," said Professor Agnieszka Wykowska. She is the lead writer of a study on the research that recently appeared in the publication Science Robots.

"The question is whether the robot gaze will evoke very similar mechanisms in the human brain as another human's gaze would," Wykowska told Reuters.

The team asked 40 people to play a video game of "chicken." In the game, each player has to decide whether to permit a car to drive straight toward another car or to turn to avoid a crash. The people were playing against a human-like robot sitting across from them.

During breaks in the game, players had to look at the robot. Sometimes the robot would look back and other times it would look away. As the interactions happened, the scientists collected data on behavior and brain activity.

"Our results show that, actually, the human brain processes the robot gaze as a social signal, and that signal has an impact on the way we're making decisions, on the strategies we deploy in the game and also on our responses," Wykowska said.

The "gaze of the robot affected decisions by delaying them, so humans were much slower in making the decisions in the game," she added.

The findings could be useful in helping to decide where and how human-like robots might be placed in the future.

When it is understood when and how robots change social behavior, "then we can decide which sort of context this is desirable and beneficial for humans and in which context this should not occur," Wykowska said.

Interest in service robots has grown quickly, says the International Federation of Robotics. From 2018 to 2019, sales increased 32 percent to $11.2 billion.

Stuart McDill reported this story for Reuters. Dan Novak adapted it for VOA Learning English. Bryan Lynn was the editor.

gaze — n. the act of fixing the eyes steadily and intensely on something

evoke — v. to bring to mind or recollection

mechanism — n. a system for achieving something

impact — n. the effect that a person, event or situation has on someone or something else

strategy — n. a plan used to achieve a particular goal

context — n. the interrelated conditions in which something exists or occurs