< A New Museum in Washington for Language Lovers
Update Required To play the media you will need to either update your browser to a recent version or update your Flash plugin.
By Dan Novak
01 June 2021


When visitors enter Planet Word, a new museum in Washington, D.C., they will see Speaking Willow, a tall art piece representing a tree.

As they pass under the artwork, they can hear recordings of speech in hundreds of languages coming from the tree. Most words sound foreign to the listeners. The different voices also speak at the same time. The resulting noise is similar to that made in a crowded theater before a show begins. 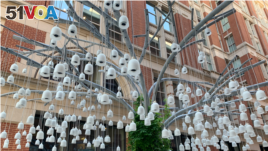 Rafael Lozano-Hemmer completed the piece last year. On his website, the artist says that Speaking Willow "reminds us that language is what defines our specific communities and connects our many cultures."

Lozano-Hemmer made the piece specially for the museum.

It is the first of many immersive experiences for visitors at Planet Word, a museum all about words and language.

The exhibits playfully explore the large and complex subject of language. Ann Friedman is Planet Word's founder and director.

"How do you make an abstract concept like words and language come to life without objects that you can touch and see and feel?....You have to have immersive, participatory experiences that you will remember forever because they are unique, exciting and social."

In one room, a video plays, showing babies saying their first words. Another room, called "Where Do Words Come From," teaches the history of some common English words. The space includes a 22-foot-tall "Wall of Words," where visitors speak into devices and learn about the roots of the English language.

Narrator 1: You're standing in front of about one thousand words. And that's not even one percent of the entire English language.

Narrator 2: Where did they come from?

That exhibit took two years to build, Friedman said, noting the time used for creation of software and sound design.

The exhibit's creators began the project with 28 English words they wanted to explain. They narrowed that list down to the most fun and interesting words. "Arachnid" was one of the words that made it into the exhibit. It is the scientific word for spiders, among other creatures.

Another room invites listeners to speak and learn about different languages. Native speakers of 28 languages and two sign languages teach people sayings in those languages. They also explain how language shapes their understanding of the world and how words cannot be separated from culture.

For example, a Japanese language presenter discussed how politeness is very important to Japanese culture. The language has several words to choose from in addressing another person. The words speak to the nature of the relationship between the speaker and listener.

The Quechua people are natives of Peru. They understand the idea of time in a singular way. The Quechua speaker explained that since the future cannot be seen, it is "behind" us. The past, however, is ahead of us, where we can see it.

Other rooms explore the different ways language is used —from humor and songwriting, to public speaking and advertising. Visitors can sing karaoke while learning about song writing, record a famous speech, play a joke-telling game, and teach a computer how to make cartoons. Almost every exhibit is interactive and most ask visitors to speak aloud.

"You get better at reading by reading," Miller said. "You become a more confident speaker by speaking and listening."

One exhibit room is all about books. It is designed to look like an old, rich library. Books line the shelves. When a book is placed on the table, a recorded reading begins and pictures appear.

Planet Word is housed in Washington's historic Franklin School. The D.C. government gave limited control of the property to Friedman in 2017. She has spent $35 million on the building and the museum.

Friedman is a former reading and writing teacher. She wanted to create a museum to build interest and curiosity in writing and language. The museum is designed mainly for teenagers, but most adults can also learn from and enjoy a visit to Planet Word.

Friedman hopes people will leave the museum with a better understanding of the words they use every day and the world of languages around them.

"And in a globalizing world, we think that's a pretty important characteristic."

Dan Novak reported this story for Learning English. Caty Weaver was the editor.

immersion — n. complete involvement in some activity or interest

abstract — adj. relating to or involving general ideas or qualities rather than specific people, objects, or actions

participate — v. to be involved with others in doing something : to take part in an activity or event with others

unique —adj. used to say that something or someone is unlike anything or anyone else

polite — adj. having or showing good manners or respect for other people

karaoke — n. a form of entertainment in which a device plays the music of popular songs and people sing the words to the songs they choose

cartoon — n. a drawing in a newspaper or magazine intended as a humorous comment on something

confident — adj. having a feeling or belief that you can do something well or succeed at something : having confidence

characteristic — adj. having a feeling or belief that you can do something well or succeed at something : having confidence