< A Chilean Tree Gives Hope for New Vaccines
Update Required To play the media you will need to either update your browser to a recent version or update your Flash plugin.
By Hai Do
11 October 2021


Quillay trees are rare evergreens found mainly in the South American country of Chile. And they are increasingly important to producing new vaccines.

The native Mapuche people have long used them to make soap and medicine. In recent years, quillay trees, also known as quillaja saponaria, have been used in the processing of food and drinks. They have also been used to make a highly successful vaccine against shingles, a painful viral disease, and the world's first malaria vaccine.

Now, molecules extracted from the bark, or outer covering, of older quillay trees are being used for a COVID-19 vaccine. It is being developed by American drug-maker Novavax. Over the next two years, Novavax plans to produce billions of treatments of the vaccine for use in developing countries. 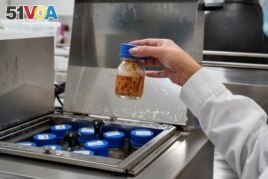 A bottle with wood from quillay tree, or Soapbark tree (Quillaja saponaria), which are native to Chile and contain a substance that can be used in coronavirus disease (COVID-19) vaccines, is shown in a laboratory at a nursery operated by U.S.-based Desert King International.

Novavax uses two molecules to make adjuvant, a substance that improves the human immune system. One of those, called QS-21, is more difficult to find. The substance is found mainly in quillay trees that are at least 10 years old.

British drug-maker GlaxoSmithKline uses QS-21 in its highly successful vaccine against shingles called Shingrix. It is also used in several other promising experimental vaccines. The quillay-based adjuvant used in Shingrix is also part of the world's first malaria vaccine, Mosquirix.

Less than one milligram of quillay extract is required to make a vaccine treatment. But the supply of quillay is stretched by the demand from other industries. Quillay products are used as a natural additive in animal feed. They also are used to kill harmful insects and as an agent to reduce pollution in mining.

Some drug-makers are developing a manufactured version of QS-21. But it could take years to get approval. Exchanging the substance for another in any existing vaccine would require new drug tests to prove the product is safe and effective.

Jason Paragas, a vice president at drug company Agenus, said, "The shortage of QS-21 has been an issue for a while." He added, "We saw it before COVID, and we made the hard decision that we had to change."

The American company in Massachusetts stopped selling the natural version of QS-21 several years ago. It now centers on trying to grow it from quillay plant cells in a laboratory. Paragas said it is too soon to know when it will be ready.

Botanical Solution, a California-based company, says it can already produce QS-21 from quillay seeds in the laboratory. The company adds that it aims to produce the substance in large quantities for drug companies.

How many quillay trees are left?

No one knows how many healthy quillay trees are left in Chile to meet the demand. Experts and industry officials believe that they will at some point need to switch to grow the evergreens on farms or in laboratories.

"My estimate four years ago was that we were heading towards the sustainability limit," he said.

Quillay producers say the harvest can continue for now without destroying the supply of older trees. Novavax told Reuters that the company is working with suppliers to make sure "life-saving vaccines will be prioritized."

Andres Gonzalez runs Desert King International which operates a quillay farm in Chile. It is Novavax's only supplier and the largest quillay exporter in the country. He said it produces enough quillay extract from older trees to make up to 4.4 billion vaccine treatments in 2022.

With new supplies from privately owned forests, he said, the operation can meet demand for the rest of this year and part of the next. He admitted, however, that "at some point, these native forests will come to an end."

Gustavo Cruz is a researcher at the University of Chile who worked with San Martin to industrialize the production of quillay. He said he generally trusts quillay producers to deal with supply and demand. He is more worried about other threats – especially a lack of water and fire.

"The trees do eventually regrow," he said, "but there comes a time when they don't anymore."

Aislinn Laing and Allison Martell reported this story for Reuters. Hai Do adapted it for VOA Learning English. Mario Ritter, Jr. was the editor.

extract –v. to remove something by pulling it out are using a process to get it out

immune system –n. the system that protects the body from disease and infections

prune –v. to cut off some of the branches of a tree so that it will grow better

sustainability –n. able to be used without being completely used up or destroyed

prioritized –adj. to be organized so that the most important thing is done or dealt with first

eventually –adv. at some time later