< A Child's Burial 78,000 Years Ago Found in Kenya
Update Required To play the media you will need to either update your browser to a recent version or update your Flash plugin.
By Susan Shand
10 May 2021


It is a place of sadness: a child perhaps 2-1/2 or 3 years old buried under the overhang of a cave, the upper part of the body once carefully wrapped in a cloth.

Scientists said last week they have found the oldest-known human burial in Africa, the continent that gave rise to our species. The area dates to about 78,000 years ago at a cave called Panga ya Saidi near the Kenyan coast. Scientists called the child 'Mtoto,' which means 'child' in Swahili.

The discovery explains some of the development of early social behaviors in human species, known as Homo sapiens, researchers say. 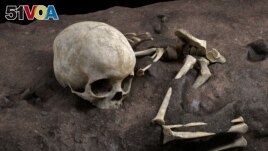 The remains of a child roughly age 3 who lived about 78,000 years ago and was found in a burial pit at a cave site in Kenya called Panga ya Saidi. (Jorge Gonzalez/Elena Santos/Handout via REUTERS)

María Martinón-Torres is the director of the National Research Center on Human Evolution (CENIEH) in Spain. She is also the lead author of the study published in the publication Nature.

Martinón-Torres said the child was buried near where he lived. She added, "Only humans treat the dead with the same respect, consideration and even tenderness they treat the living. Even when we die, we continue to be someone for our group."

The remains of the bones were found in a round hole. They were secured in plaster and later taken to the research center for study.

The researchers believe that the child was placed in the grave with his knees upward, lying on his side. It is not yet known if the child is a male or female.

The body was fresh when it was buried, then quickly covered with dirt from the floor of the cave.

"This would likely have been a group act, perhaps by members of the child's family. All of these behaviors are, of course, very similar to those observed in our own species today, so we can relate to this act even though the burial dates to 78,000 years ago," said study co-author Nicole Boivin. She is an archaeologist and director at the Max Planck Institute for the Science of Human History in Germany.

The researchers wondered about the special meaning of a child's burial.

It is unclear when funereal behavior began, but both Homo sapiens and its closely related species, Neanderthal, practiced it. Martinón-Torres called it "a type of behavior that allow us to maintain links with those who died and offer a farewell."

The oldest Neanderthal burial area, in Israel, dates to about 120,000 years ago, similar in age to the oldest-known Homo sapiens burials, also in Israel, Boivin said.

The researchers said it is unclear whether funereal behavior began outside Africa and was later practiced in Africa or began in Africa. There is not enough archeological evidence to know.

Mtoto was part of a hunter-gatherer culture. Animal remains were also found in the area, set in a forest. Stone tools were also found, including pointed stones for weapons.

"So, we have a picture of what life was like at the time of Mtoto's life and death," Boivin said.

The Reuters News Agency reported this story. Susan Shand adapted it for Learning English. Hai Do was the editor.

cave – n. large hole that was formed by natural processes in the side of a cliff or hill or under the ground

plaster – n. a wet substance that hardens when it becomes dry and that is used to make smooth walls and ceilings

archaeologist – n. a science that deals with past human life and activities by studying the bones, tools, etc., of ancient people