< With Internet Restricted, Myanmar Activists Turn to Radio to Reach Public
Update Required To play the media you will need to either update your browser to a recent version or update your Flash plugin.
By Bryan Lynn
05 April 2021


As Myanmar's military leaders continue to restrict internet use, some pro-democracy activists have turned to radio to get their message out.

On April 1, operators of Federal FM Radio launched their new station. They say the unregistered station aims to provide citizens with information about events happening around the country without the influence of military propaganda. It will also seek to inform listeners about the idea of federalism – a political system in which power is divided between the national and local governments.

The military overthrew Myanmar's elected government on February 1. The new rulers immediately ordered restrictions on internet use and also have closed many independent media organizations. 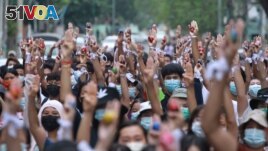 Anti-coup protesters raise decorated Easter eggs along with the three-fingered symbols of resistance during a protest against the military coup on Easter, April 4, 2021, in Yangon, Myanmar.

A founding member of Federal FM Radio spoke to VOA about the station. "When the internet is cut off, the federal radio will be the means of communication and to communicate with each other," the member said. The person did want to be identified for security reasons.

The individual said the station will provide information to pro-democracy leaders in different areas and can be used as a "powerful weapon" against the military government.

"One (purpose) is to educate, to inform about federalism," the person told VOA. The first listeners were in Yangon, but there are plans to expand radio service to the whole country. Organizers say the non-profit program is made up of community volunteers.

One state-run newspaper reported that Myanmar's Military Council declared it planned to "take action" against the program because it is not a registered broadcasting organization.

One organizer admitted there were clear dangers for people involved with the station. In an effort to protect the workers, the group tries to carry out its activities "evasively," the person said.

A Federal FM announcer told VOA that the station's main goal is to publicize the idea that a "federal democratic union" would be the best political system for the future of Myanmar.

Myanmar, formerly known as Burma, gained independence in 1948 from Britain. But most of its modern history has been governed under military rule. In 2015, the National League for Democracy (NLD) party, led by Aung San Suu Kyi, won the country's first open democratic election.

The latest military takeover took place on the day newly elected lawmakers were supposed to take their seats in Parliament. The generals said they seized power because of wrongdoing in elections in November. The military also detained Suu Kyi and President Win Myint.

Large pro-democracy demonstrations began across Myanmar soon after the military seized power. The protesters are demanding that the military return power to the democratically elected government.

The government has answered the activism with bullets, tanks and airstrikes targeting demonstrations. The group Assistance Association for Political Prisoners estimates that thousands of people have been detained and more than 550 killed. Exiled political prisoners from Myanmar formed the association.

Tommy Walker reported this story for VOA News. Bryan Lynn adapted the report for Learning English, with additional information from The Associated Press. Caty Weaver was the editor.

notice – n. a sign or signal giving information about something