< US Could Consider Protections for ‘Climate Refugees’
Update Required To play the media you will need to either update your browser to a recent version or update your Flash plugin.
By Bryan Lynn
23 April 2021


The U.S. government is considering a plan that would offer protections to people coming into the country to flee areas threatened by climate change.

No country offers asylum or other legal protections to people displaced specifically because of the effects of climate change. President Joe Biden's administration is studying such a plan.

Biden issued an executive order in February that instructed his national security advisor, Jake Sullivan, to discuss with federal agencies how such protections could be created. His discussions are expected to center on how the U.S. could identify and resettle people displaced directly or indirectly by climate change. A report on the discussions is expected in August.

A recent report by the World Meteorological Organization found that since 2010, about 23 million people a year have been displaced by drought, rising sea levels and other climate caused disasters. The United Nations says there may be as many as 200 million climate-displaced people worldwide by 2050.

The plan to offer protections to people fleeing climate change-related events is supported by Democratic Senator Edward Markey of Massachusetts. He plans to reintroduce legislation to address the lack of protections for those who do not fit the narrow definition of "refugees" under international law.

"We have a greater chance now than ever before to get this done," Markey said in a statement to The Associated Press. He said this is because Biden is good at climate diplomacy and has a great awareness of the climate problems facing the world. 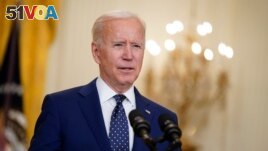 In this April 15, 2021, file photo, President Joe Biden speaks in the East Room of the White House in Washington. (AP Photo/Andrew Harnik, File)

Political experts say such legislation is likely to face a lot of opposition. One problem would be how to define a climate refugee when natural disasters and violence often both happen in areas people are fleeing, such as Central America.

If the U.S. did define a climate refugee, it could mark a major change in refugee policies worldwide. Supporters of such a plan say it would make sense for the U.S. to lead the way.

"No nation in the world has taken the leadership to address this reality, which we face today," said Krish Vignarajah. She heads the Lutheran Immigration and Refugee Service. "It's not an issue that we can punt to 20, 30 years from now," she told the AP. "Our hope is the U.S. can take strong action that will produce a domino effect on other nations."

A study by university researchers in the U.S. suggests climate change is moving away from a migrant population of mainly men seeking better economic situations to families fleeing hunger.

Researchers at Duke University and the University of Virginia studied migration out of Central America. The study involved data on about 320,000 Hondurans caught at the U.S.-Mexico border from 2012 to 2019. The information showed that the individuals were largely from violent, agricultural areas that were also experiencing their lowest rainfall in 20 years.

While the study found that climate change is a driving force, there remains little political will to help climate migrants, said the study's co-writer, David Leblang. He is a professor of politics and policy at the University of Virginia.

"As a political scientist, I would say the chances of this happening right now are close to zero," he said. Some experts say political pressure may lead Biden to drop the idea after the number of people stopped by the Border Patrol last month hit a 20-year high.

The mayors of several U.S. cities, including Los Angeles, New York and San Diego, wrote a letter to President Biden about the issue. It urges Biden to include the mayors in discussions about the plans so they can help come up with the right possible solutions to protect climate migrants.

In New Zealand, a new government in 2017 tried offering humanitarian visas to Pacific Islanders affected by climate change. The program aimed to let in about 100 people a year. Six months later, the plan was dropped. New Zealand's Climate Change Minister said the government decided instead to center on reducing emissions so people do not become displaced.

The Associated Press reported this story. Bryan Lynn adapted the report for VOA Learning English. Susan Shand was the editor.

drought – n. a period of extended dryness caused by a lack of rain

punt – v. to decide not to do something

domino effect – n. a situation in which something, usually bad, happens and causes other similar events to happen