< Study: Plastic Pollution Flowing into Oceans to Triple by 2040
Update Required To play the media you will need to either update your browser to a recent version or update your Flash plugin.
By Ashley Thompson
28 July 2020


The amount of plastic waste flowing into the ocean could triple in 20 years unless businesses and governments act to reduce plastic production. That warning comes from a new study that appeared recently in the publication Science.

The study was carried out by scientists and industry experts for The Pew Charitable Trusts and SYSTEMIQ, an advising business. The study, called "Breaking the Plastic Wave," identified measures that could reduce plastic pollution that gets into the ocean by 80 percent.

"Plastic pollution is something that affects everyone. It's not a ‘your problem and not my problem'. It's not one country's problem. It's everyone's problem," said Winnie Lau. She is a senior official at Pew and one of the lead writers of the study.

"It's going to get worse if we don't do anything," she added.

The report suggests redirecting hundreds of billions of dollars in plastic production investment into alternative materials. The report also calls for recycling centers and waste collection expansion in developing countries.

Such action would require a sharp change in how the energy industry does things. The industry has been building new chemical plants around the world to increase plastic output. This is happening as the industry's traditional fuel business has decreased because of a rise in cleaner energy sources. 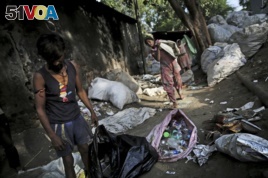 The plastic industry has pushed back against government bans on single-use plastic products. Some of the biggest buyers of plastic are major companies like Coca-Cola, PepsiCo, Nestle and Unilever. These companies have all made promises to use a greater amount of recycled material in the future.

But current promises from businesses and governments will not reduce plastic enough. In fact, the Pew and SYSTEMIQ study found that current measures would only reduce the plastic flowing into the ocean by 7 percent by 2040.

To cut the flow of ocean plastic by 80 percent, the study said that paper or other materials that break down naturally must be used instead of single-use plastic. It also notes that packaging for products should be redesigned.

Some people have criticized the study for including burning, chemical recycling and plastic-to-fuel factories as ways to deal with plastic waste. Critics note that these methods involve the release of heat-trapping carbon gasses while also helping to continue with plastic production.

Single-use plastic products have become increasingly popular during the coronavirus crisis, the International Solid Waste Association has said. Face coverings and latex gloves are washing up each day on empty beaches in Asia. And landfills worldwide are filled with record amounts of food containers and delivery packaging.

triple –v. to cause something to grow three times (or 200 percent) larger

alternative –n. something that can be chosen instead of something else

discourage –v. to make a person or group less likely to do something

packaging –n. protective material that encloses something so that it can be transported without damage