< Study: Ozone Pollutants Still Increasing in Northern Hemisphere
Update Required To play the media you will need to either update your browser to a recent version or update your Flash plugin.
By Bryan Lynn
06 September 2020


A new study has found that ozone pollutants in Earth's lower atmosphere increased across the Northern Hemisphere over the past 20 years.

Ozone is a form of oxygen. In Earth's upper atmosphere, it acts as a barrier to block harmful radiation from the sun. But closer to Earth's surface, ozone is a common pollutant. At ground level, high levels of ozone can harm people's lungs and damage plants.

A European research program called the In-Service Aircraft for a Global Observing System collected the data. The program equips commercial aircraft with instruments to measure atmospheric conditions during flight. The study, published recently in Science Advances, is the first to use information from passenger planes.

The Cooperative Institute for Research in Environmental Sciences (CIRES) carried out the research. It is a partnership of the National Oceanic and Atmospheric Administration (NOAA) and the University of Colorado Boulder. 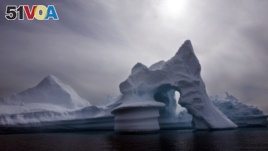 In this July 19, 2007 file photo an iceberg is seen off Ammassalik Island in Eastern Greenland. The Arctic is a thermostat against overheating and a barometer of change, but now its own protective ozone layer that keeps out damaging ultraviolet radiation has thinned to record levels, the U.N. weather agency said Tuesday April 5, 2011. (John McConnico, Associated Press)

The researchers used ozone observations from more than 60,000 flights worldwide. The scientists centered on five areas of the Northern Hemisphere – the northeastern United States, Germany, India, Southeast Asia and Northeast China and Korea.

The Northern Hemisphere was studied because it contains a large percentage of the human population affected by air quality.

The study found that overall, ozone levels in most parts of Earth's atmosphere increased in the Northern Hemisphere during the past 20 years.

The researchers did, however, report lower ground-level ozone in some areas, including North America and Europe. But they said those results were canceled out by increases in ozone higher up in the atmosphere.

Audrey Gaudel was the lead writer of the study. She is a CIRES scientist working in NOAA's Chemical Sciences Laboratory. The results are, in her words, "a big deal because it means that as we try to limit our pollution locally, it might not work as well as we thought."

Gaudel said the data collected by international aircraft was very valuable in creating a clear picture of ozone levels over the Northern Hemisphere over long periods. Other methods of long-term data collection have produced conflicting ozone results. She noted that between 1994 and 2016, commercial aircraft planes had captured nearly 35,000 ozone profiles.

The research team used the data to estimate changes in lower atmospheric ozone from the mid-1990s to 2016. On average, ozone values increased about 5 percent every 10 years.

To explore what was causing the changes, the scientists examined levels of nitrogen oxides, a mixture of gases made up of nitrogen and oxygen. Nitrogen oxides are considered to be atmospheric pollutants often resulting from human activities.

The researchers used the aircraft data to create models to estimate how nitrogen oxide releases affected atmospheric conditions. They said results suggested that increased releases in the tropics, the area close to the equator, "were likely driving the observed increase of ozone in the Northern Hemisphere."

The team said it found some of the sharpest increases in areas where ozone levels were once the lowest. These included Malaysia and Indonesia, as well as other parts of Southeast Asia, and India. Those areas had very low ozone values between 1994-2004, but very high levels in recent years, between 2011-2016.

Next, Gaudel said her team plans to take a closer look at ozone levels in the tropics. She thinks Africa will be one area to watch as a possible "hot spot" of increasing pollutive releases in coming years.

Bryan Lynn wrote this story for VOA Learning English, based on reports by CIRES, the University of Colorado Boulder and Science Advances. Caty Weaver was the editor.

profile – n. a set of data that describes the significant features of something

hot spot – n. a place with more than the usual amount of interest or activity