< Space-aged Wine Bottle Could Get $1 Million
Update Required To play the media you will need to either update your browser to a recent version or update your Flash plugin.
By Dan Novak
09 May 2021


For 14 months, a French wine aged in space. Now, it has returned to Earth to be sold.

A single bottle from a case of space-aged Bordeaux is being put up for sale by the auction house Christie's. It may cost up to $1 million. 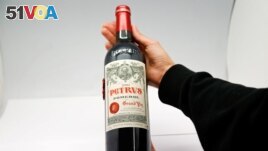 A woman holds a bottle of Petrus 2000, a space-aged bottle of fine French wine part of a case of Bordeaux that was literally matured in Earth orbit for 14 months. (REUTERS/Gonzalo Fuentes)

The wine is a 2000 vintage Petrus. It is considered a world-class red wine made from Merlot grapes in the Pomerol region of Bordeaux. The sale was announced Tuesday in London.

Tim Triptree works for Christie's wine and spirits division. He said the bottle adds to a "greater understanding of the maturation of wine."

The money from the sale will go to the European rocket company, Space Cargo Unlimited. The company has experimented with viticulture and microgravity. It launched the 12 bottles of Petrus 2000 in November 2019, and flew them to the International Space Station.

The bottles were taken back to Earth in January. They spent almost 440 days, and about 300 million kilometers, in orbit.

The wine returned to Bordeaux, where a bottle was opened for a taste test at the Institute for Wine and Vine Research. Top wine experts compared the space-aged wine with Petrus bottles that stayed on Earth.

Jane Anson is a leading wine critic and a writer for the wine magazine Decanter. She and the other two experts thought there was a clear difference between the two.

The space bottle "seems more evolved than I would expect from a 21-year-old bottle of Petrus 2000," Anson said in Decanter.

"It is beautiful and nuanced, with fine tannins and a sense energy."

Christie's is selling a bottle of the space-aged wine, along with a bottle of the original Earth-aged Petrus 2000. The purchase also includes a set of glasses and a corkscrew made from a meteorite.

auction-n. a public sale at which things are sold to the people who offer to pay the most

grape – n. the fruit that is used to make wine

mature-adj. having reached a final or desired state

viticulture-n. the study of grape cultivation

orbit –n. the curved path that something (such as a moon or satellite) follows as it goes around something else (such as a planet)

evolved-n. to change or develop slowly often into a better, more complex, or more advanced state : to develop by a process of evolution

tannin-n. a reddish acid that comes from plants, is used in making ink and leather, and occurs in various foods and drinks (such as wine)