< Some Belgians Shout: ‘King! Open Your Garden'
Update Required To play the media you will need to either update your browser to a recent version or update your Flash plugin.
By Susan Shand
08 March 2021


During this time of pandemic restrictions in Belgium, people in the capital city of Brussels want to experience open spaces.

However, public spaces with tree and green grass have become so crowded that social distancing is impossible. Yet one family has a large garden in the city just for themselves. And it is creating some anger.

The large garden in the city's center belongs to the Belgian royal family. The garden, surrounding their palace, is about 200 hectares or almost the size of the city-state of Monaco. 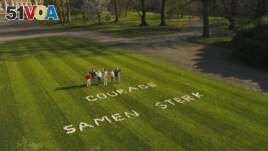 In this image from VTM video, Belgium's King Philippe, right, stands with members of his family in the Royal Gardens of Laeken with a message 'Courage, strong together' written on the lawn on April 4, 2020. (VTM via AP)

More and more Belgians are now asking King Philippe why his garden should be closed to the public during the world's worst health crisis in 100 years.

So far, however, the garden is closed.

"They hardly ever get in there. Come on! Those gardens are simply empty," said Luckas Vander Taelen. He is a Brussels historian and a former member of the European Parliament.

Also, the royal gardens are surrounded with overcrowded and poor neighborhoods in the Laeken area of Brussels. Most families who live there do not have any outdoor space and lack the money to travel to green areas.

"The local people want a park right here because they don't have the means to pay for transport," said Saliha Mahdi. She is a social worker in Laeken.

King Philippe appears not to understand people's anger. He permitted a drone to fly over the large garden to show that his family, like all Belgian families, was in lockdown at home. Inside the garden, the royal family had written in large letters, "Courage Strong Together."

Together? asked some. Not really.

The pandemic has made the King's private garden a political issue as the spring nears. The governing parties and some of the opposition parties support the idea of opening the gardens to the public.

It is more difficult than simply letting them in, however.

If the garden is opened to the public, should it be managed by the city, the country or the royal family? Also, the palace needs to remain secure for the king, his family and visitors.

Then there is the garden itself. The place is filled with unusual plants and endangered animals. Some fear the crowd will interfere with nature.

The royal family has not commented about the garden. But historian Vander Taelen believes the king will soon decide to open the garden.

"They would show solidarity with the needs of their people, of their city," he said.

garden – n. an area of ground where plants (such as flowers or vegetables) are grown

royal – n. something to do with a king or queen

palace – n. the place where a king or queen lives

park – n. a garden with places for children and families

drone – n. a type of small aircraft that flies without a pilot

solidarity – n. showing agreement with someone or something