< Should a King Be More than a Queen in Card Games?
Update Required To play the media you will need to either update your browser to a recent version or update your Flash plugin.
By Dan Friedell
27 January 2021


A woman in the Netherlands was unhappy that a king is more valuable than a queen in a deck of playing cards.

Indy Mellink, 23, went to school to study psychology. She wondered if that situation could be changed. She said rating a male higher than a female was just another part of life that makes people think men are more important than women. Some people call this gender inequality. Instead, treating women and men the same, they say, is an example of gender neutrality. 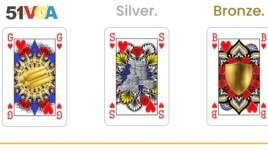 Some people might say "it's just a card game." But Mellink does not agree. She said: "even subtle inequalities like this do play a big role" in influencing the way the world sees women.

So what did she do? Mellink thought for a while about how to change the pictures on the cards. After some time, she came up with an idea that most people know because of the Olympics.

The most important card would no longer be the king, it would be gold. The next card would be silver and the third, bronze. For that reason, Mellink's cards are now called GSB, which stands for Gold, Silver, Bronze.

She sold the first 50 decks to friends and family. The cards are now being sold online. About 1,500 decks have been sent to buyers around the world.

Card players involved in product testing said they had never thought about gender inequality in their games before. Changes to the rules of card games that rank the king above the queen may take some time. But, some serious players are trying out Mellink's cards.

Berit van Dobbenburgh is head of the Dutch Bridge Association. She gave it a try, and said she thought it was a good idea to think about gender neutrality.

"It's great that someone of this age has noticed this. It's the new generation," she said.

Esther Verkaik wrote this story for Reuters. Dan Friedell adapted it for Learning English. Mario Ritter, Jr. was the editor.

What do you think of gender neutral playing cards? We want to hear from you. Write to us in the Comments Section.

gender- n. the state of being male or female

role –n. the part someone or something plays in an activity or situation; the part an actor plays in a play or movie

association- n. an organized group of people who have the same interest, job, etc.