< Shark Populations Dropped 71 Percent Since 1970
Update Required To play the media you will need to either update your browser to a recent version or update your Flash plugin.
By Jonathan Evans
01 February 2021


Scientists have known for decades that the numbers of some shark species are decreasing. But a new study shows just how severely worldwide populations have dropped in the past 50 years.

The numbers of oceanic sharks and rays fell more than 70 percent worldwide between 1970 and 2018. The information comes from a study that appeared recently in the publication Nature.

Stuart Sandin is a marine biologist who works at the Scripps Institution of Oceanography. He says that sharks are great hunters, fast swimmers and have extraordinary senses. 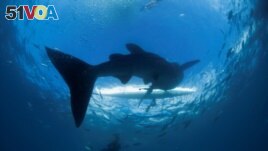 FILE - A scuba diver swims near a whale shark as it approaches a paddleboat off the beach of Tan-awan, Oslob, in the southern Philippines island of Cebu, March 1 2013. (REUTERS/David Loh/File Photo)

Sandin adds that they can identify any changes in the ocean from a great distance, such as smells or tiny changes in water flow.

Their ability to quickly sense anything outside the norm in their environment helps them find food in the open ocean. But it also makes them especially at risk in the face of increased international fishing pressure.

"You drop a fishing line in the open ocean, and often it's sharks that are there first — whether or not they're the primary target," said Sandin.

Nathan Pacoureau is a biologist at Simon Fraser University in Canada and one of the writers of the study. He said, "The last 50 years have been pretty devastating for global shark populations."

Sometimes sharks are caught on purpose by fishing boats. But more often they are caught while fishing for other species such as tuna and swordfish.

Sharks and rays are both fish with skeletons made of cartilage, not bone. Unlike most other kinds of fish, they are not able to reproduce for several years, and also produce fewer young.

Pacoureau said sharks reproduce more like mammals than fish, so "their populations cannot replenish as quickly as many other kinds of fish."

The number of fishing boats in the open ocean has risen sharply since the 1950s. Climate change and pollution also place shark survival at risk. But increased fishing pressure is the greatest threat for every oceanic shark species.

Stuart Pimm is an ecologist at Duke University and was not involved in the study. He said the removal of top hunters like sharks from the ocean affects all sea life.

"Sharks are like the lions, tigers and bears of the ocean world, and they help keep the rest of the ecosystem in balance," Pimm said.

cartilage – n. a strong but flexible material found in some parts of the body (such as the nose, the outer ear, and some joints)

mammals – n. types of animals that feed milk to its young and that usually have hair or fur covering most of its skin

replenish – v. to fill or build up (something) again