< Rhino Poachers Return After South Africa Eases Pandemic Restrictions
Update Required To play the media you will need to either update your browser to a recent version or update your Flash plugin.
By Dan Novak
06 May 2021

Limits on international travel had the benefit of keeping poachers away. In 2020, 394 rhinos were poached, 30 percent fewer than 2019 and the fewest since 2011.

Jo Shaw is the Africa Rhino Lead for the World Wildlife Fund International Network. She said that since November and December of last year, there has been a serious increase in the number of poachings, especially at Kruger National Park. The park is located in northeast South Africa, and is one of the largest wildlife reserves on the continent.

She did not say how many total poachings had happened this year.

"There is a very real ... threat as poaching pressure has increased since lockdown, perhaps to meet the demand from the international markets," she said.

The WWF says rhinos are poached for their horns. The horn is used in many Asian traditional medicines. The horn is also a sign of wealth.

Rhinos are sometimes shot with a tranquilizer gun before their horns are cut off, Save the Rhino said on its website. The animal is then left to bleed to death.

Julian Rademeyer works to fight organized crime in Africa at the Global Initiative Against Transnational Organized Crime. He said other rhinos are killed with high-powered hunting rifles.

Beacause of the pandemic, nature reserves have had fewer visitors than usual. Budget cuts have forced reserves to shrink their anti-poaching security operations.

But some reserves are taking the step to keep poachers away by safely dehorning rhinos.

Veterinarians cut the horn at the base, rather than removing it all, which prevents the rhino from bleeding to death. One nature reserve in Kruger National Park has de-horned 100 rhinos since April 2019. 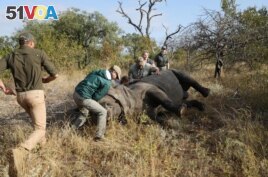 Veterinarians attend to a tranquillised rhino before it is dehorned. April 26, 2021. REUTERS/Siphiwe Sibeko

Frances Craigie is the head of enforcement at South Africa's environmental ministry. He says there are about 16,000 rhinos living in the country. The ministry is expected to release the South Africa's 2021 half-year poaching numbers at the end of June.

Poaching and droughts in the northeast region of South Africa have badly hurt the rhino population. In Kruger National Park, the number of rhinos has gone down by more than two-thirds in the past 10 years. A South African National Parks report showed that in 2008, there were 11,800 rhinos. In 2019, there were just 3,800 left.

Akhona Matshoba reported this story for Reuters. Dan Novak adapted it for VOA Learning English. Susan Shand was the editor.

poach– v. to hunt or fish illegally : to catch or kill an animal illegally

reserve - n. an area of land where animals and plants are given special protection

pressure-n. the force that you feel when people are trying to persuade or force you to do something by using arguments, threats, etc.

smuggle –v. to move (someone or something) from one country into another illegally and secretly

tranquilizer-n. a drug that causes a person or animal to become very relaxed and calm

veterinarian – n. a person who is trained to give medical care and treatment to animals

drought-n. a long period of time during which there is very little or no rain