< In a Greek Detention Center, an Official Uses TV to Teach Prisoners
Update Required To play the media you will need to either update your browser to a recent version or update your Flash plugin.
By Armen Kassabian
28 February 2021


The director of a detention center in Greece is using television to teach the young men there who have no other way to get an education.

Petros Damianos is the director of the school at Greece's Avlona Special Youth Detention Center. He started the school in 2000. The men held at the detention center are between the ages of 18 to 25. Attendance at the voluntary school became popular. By September 2020, 96 percent of the prisoners had signed up.

Students can earn graduation certificates similar to any Greek school. Teaching follows the national rules for education from grade school up to college levels.

But, in-person classes were canceled because of restrictions meant to prevent the spread of the new coronavirus. In addition, internet connections are not permitted at the center. So, Damianos decided to create a TV channel to teach the young men. 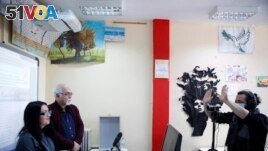 The online world isn't available to all students, especially for students at Avlona Special Youth Detention Center, where internet devices are banned by law from the cells, February 10, 2021. (AP Photo/Thanassis Stavrakis)

"Our teachers couldn't reach the kids like they reach all other kids in Greece," said Damianos. "This was a big problem, a very big problem that seemed almost insurmountable."

Education can be an important tool that prisoners can use to improve their lives. Many of Avlona's prisoners have never graduated and or even completed early grades.

"Our students are those who...before they got to prison, the education system expelled them," Damianos said. "These kids are kids we didn't catch in time. To whom we as a society, when we should have, didn't give what we should have given." With the help of friends with technical knowledge, Damianos was able to create a TV channel to broadcast classes.

Nikos Karadosidis is Avlona's music teacher. He used his experience from technical work on musical performances and YouTube teaching videos to learn how to use the equipment for the channel. "I very quickly realized that this whole thing is essentially DIY," Karadosidis explained. "Do it yourself, with whatever materials you have, with whatever tools you have, to try to do the best you can."

With the help of donations, volunteers and online orders, the employees collected the equipment they needed. A classroom in the prison was changed into a studio with a video camera.

One month later, the channel was ready. It was named Prospathados TV, which means "Trying TV" in the Greek language. The prisoners could watch the new channel on their televisions.

The first program was a half-hour math class. Now the channel operates 24 hours a day. It continuously shows six hours of pre-recorded classes during the week, and eight hours of classes on the weekend. Teachers record new classes each day with subjects like math, economics and music. Karadosidis works at night and broadcasts the classes the next day.

Going to class provides more than just an education. School is a short escape from the difficulties of prison life.

Based on the prison's rules, prisoners can only be identified by the first letter of their first and last name. M.S. is a 21-year-old who earned his high school diploma in Avlona. He has two years left in his sentence for stealing and beatings.

He is now taking college-level classes at the school in photography and similar arts. He says the TV channel has become popular. "School is something different. It's a bit more human than the rest of the prison," said M.S. "We come here and we joke around with our teachers. They take care of us...It's a bit like a family."

Once the coronavirus crisis is over, Damianos would like to expand the channel to include documentaries and other programs for teaching. While the TV channel is a temporary answer to a problem, he knows that televised classes are not the same as in-person classes.

"Let's be honest, the channel can't replace the education that takes place in school," Damianos said. "It is very important, but it is not enough."

Elena Becatoros from The Associated Press reported this story. Armen Kassabian adapted it for Learning English. Mario Ritter, Jr. was the editor.

certificates – n. a document that is official proof that you have finished school or a course of training

insurmountable – adj. impossible to solve or get control of

studio – n. a place where radio or television programs are broadcast

diploma –n. a document which shows that a person has completed a course of study or has graduated from a school

replace – v. to be used instead of (something) else

What do you think about the topic of educating people who are in prison? We want to hear from you. Write to us in the Comments Section.