< Husband, Wife Beekeepers Start Business During Pandemic
Update Required To play the media you will need to either update your browser to a recent version or update your Flash plugin.
By Mario Ritter Jr.
26 October 2020

"You have to be a little crazy," Cook said. He and Jones knew the problems their bees face. These include harmful organisms called parasites and insect-killing farm chemicals.

Even so, they were hopeful. The year 2020 was to be their year to go into business on their own after working several years for another beekeeper.

Cook, Jones and their bees spent the past winter in California's huge almond farms. In the spring, the farms, or orchards, are full of white flowers that turn into nuts. The crop is possible because of the many beekeepers who travel with their hives to pollinate the nation's crops.

"Do we stay? Do we go?" they asked each other. By that time, they had taken their hives from California's San Joaquin Valley to another temporary home. Their plan was to let the bees recover from the agricultural work and their contact with farm chemicals.

There, they raised "nucs." These are groups of bees with new queens that can be used to start a new hive. The couple sells them to other beekeepers to replace bees that are lost over a season. Selling nucs and almond pollination represent about two-thirds of their business. The other one-third is honey-making. They make honey during the summer at their permanent base -- a farm in Wisconsin. 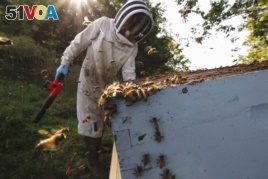 Agricultural workers are considered essential. Beekeeping generally does not require Jones and Cook to be near other people. So, they decided to wait out the coronavirus restrictions in California. Then they returned with their bees back to Iola, Wisconsin. There, they set out to create their brand, Bird and the Bees Honey.

The bird is their parrot, which often rides in their truck. The parrot also happens to like honey.

This summer, Cook and Jones and their small crew worked day and night to build a honey factory out of old truck trailers. They were extremely tired and in debt because they took loans to get the business up and running. But they were also excited.

The 38-year-old Jones noted how much of the honey available in stores is mixed and cooked. "And I thought that people deserved good honey," she said.

Unlike other agricultural crops, honey also can be stored for a long time. That is a good thing for Cook and Jones, because coronavirus restrictions have left them with fewer places to sell their products. Farmers markets' have been limited. So have restaurants and breweries. Such businesses also buy and use honey.

Cook, who is 35, said the experience of starting a business in these difficult times will make them more resilient.

"I think beekeeping sort of taught me...you kind of need to look for the optimism and the beauty that you can find," he says.

Martha Irvine and Carrie Antlfinger reported this story for the Associated Press. Mario Ritter Jr. adapted it for VOA Learning English. Ashley Thompson was the editor.

pollinate –v. to give a plant pollen from another plant of the same kind so that it will produce seeds and reproduce

solitary –adj. separate from other people or things

brand –n. a kind of product identified by its own name that is made by a company which sells and markets the product

deserve –v. that someone should have or be given something

resilient –adj. about to become strong, healthy or successful after something bad happens, able to come back into shape after being pulled or stretched

optimism –n. a feeling or belief that good things will happen in the future