< Desks of Their Own Help Children with Online School
Update Required To play the media you will need to either update your browser to a recent version or update your Flash plugin.
By Anna Matteo
28 October 2020


As online schooling took effect during the coronavirus pandemic, parents across the United States noted that many children did not have their own learning areas at home.

So, they got busy. They built, collected, and donated desks. Hundreds, maybe even thousands, of students in the U.S. now have workspaces to call their own. Parents say this is helping their children get through long days of online learning at home.

One father, named Mitch Couch, lives in central California. His 16-year-old daughter and 9-year-old son are both studying from home. And they kept taking over the kitchen table for their online school lessons. He said this gave him an idea -- he would make them their own desks. 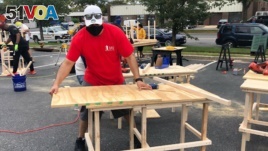 After seeing how it helped his family, he had a thought: Why not provide other children with their own desks -- ones that they could decorate with stickers and fun paint?

His idea was to show others how to build desks for their children. He made a quick YouTube video to guide parents in desk-making.

The desks he made were child-size, simple and not costly. Couch said that he built his children's desks for about $20. He made them from plywood. A single piece of plywood, 1.2 meters by 2.4 meters, makes four desks. He also added a built-in area for books and papers. It was a simple structure, but it worked.

Leaders of a food store saw his video online. They offered to provide materials if he would build more. They also contacted local school officials to help identify students in need.

The first order was for around 20 desks. But it quickly increased at least 50 more.

On a recent day, Couch was building more than 10 desks in an area outside of his house. He has made many of these desks. So, he can build one in just about 15 minutes.

Neighbors stop by to shake his hand. He has received many thank-you messages and pictures from parents. Some parents said that their children were "doing better and focusing more" because they have their own space.

Another father, this time in Omaha, Nebraska, also began making desks for his own family. Marcus Holley has eight children and does not have strong building skills. So, he searched online and found a simple design for desks that cost about $24 to build.

After his family's needs were met, he began making more for others.

When the price of wood increased, Holley launched an online fundraiser. This would cover the cost of materials and keep the desks free of charge to families. First, one person donated $1,000. After a local news station ran a story about his desk-making project, donations reached close to $8,000.

A few times, two friends have helped Holley. But for the most part, he has been building the desks by himself for students, teachers, and childcare centers. He has built about 150 desks so far.

Requests continued to come in.

"Just do good," Holley told the AP. "Help others and love."

In Gaithersburg, Maryland, a city near Washington, D.C., Jessica Berrellez was already involved in a project with other moms. They were providing virtual educational materials for children from poor families. The next step was supplying other tools for online learning, such as headphones, whiteboards, and desks.

Berrellez got her husband Al to help. Before he went to a store to pick up materials, he watched some online videos on desk-making. He built his first test desk in about an hour at a cost of around $40. At first, Al and Jessica provided all the labor and funding. But the work soon became too much for two people with full-time jobs.

So, they started a Facebook group, Desks by Dads. Now, others give suggestions on how to improve the design. Money now comes from donations. Also, there are about 60 desk-building helpers – from older people no longer working to other thankful parents who have gotten a desk and now went to help other families. The group has built and delivered 138 desks to kids in need.

"Our greatest hope was that other people would step in and help," Berrellez said. "And it's happened."

Jessie Wardarski, Peter Orsi wrote this story for the Associated Press. Anna Matteo adapted it for Learning English. Ashley Thompson was the editor.

kitchen – n. the room in a house or apartment where food is cooked and sometimes eaten

desk – n. a piece of furniture with a flat or sloping surface for use in writing or reading

decorate – v. to make (something) more attractive usually by putting something on it

sticker – n. something (as a slip of paper with glue on its back) that can be stuck to a surface

plywood – n. a strong board that is made by gluing together thin sheets of wood

fundraiser – n. a social event or other effort held for the purpose of raising funds, or money